This nonprofit has woven clean energy into its culture and operations

Only “environmental” organizations invest in clean energy and efficiency, right? And they do it only because it’s good for their brand, right? Wrong and wrong! 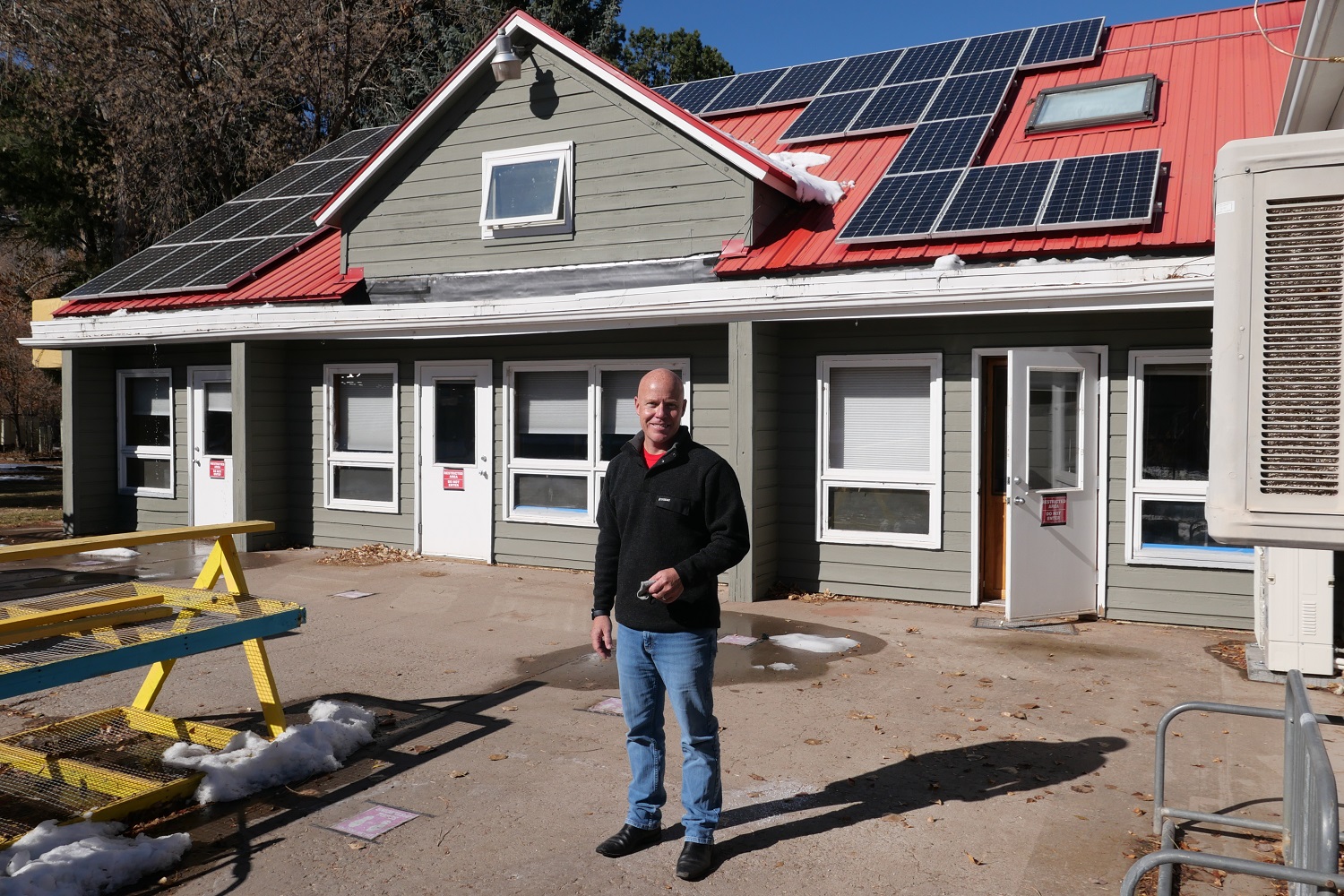 Mountain Valley Developmental Services, based in Glenwood Springs, has made saving energy part of its organizational culture for over a decade – producing cost savings that are plowed back into the nonprofit’s programs, and practices that have become woven into its operations.

At first glance, saving energy might seem off-mission for an organization dedicated to supporting people with developmental disabilities. But every organization uses energy, and energy costs money, and money is what makes nonprofit programs go. A dollar saved on energy is as good as a dollar raised from donations or grants.

Most of Mountain Valley’s funding comes from Medicaid, which can fluctuate considerably from year to year, explains executive director Sara Sims. “One of the ways to have control over that is to reduce expenses any way we can, and a big way we do that is with renewable energy.”

Over the past 15 years, the nonprofit has invested in rooftop solar, solar hot water and a growing fleet of electric vehicles. And Sims says much of the credit for that goes to one individual: Adam Juul, assistant director of day services.

“The great thing about Adam leading our clean energy movement is that he has educated himself on the matter and researched the necessary technology to implement it,” she says. “He’s the content expert and therefore doesn’t need a whole lot of help from others who don’t understand it as thoroughly. I think more businesses and homeowners would make the move to cleaner energy if they had an Adam!”

As he gives a tour of Mountain Valley’s energy systems, Juul projects the quiet pride of someone who’s managed to merge his passion with his work.

“I think I’ve had this ethos all my life,” he says, describing the various energy efficiency measures he put into practice in his own home before bringing them to Mountain Valley. He began with easy ones, like putting R-39 insulation in the roof and replacing old lightbulbs with LEDs. They paid for themselves in a year or less. Persuading his wife to go for a rooftop solar system was harder – but rebates got the price down to what he could afford, which he financed with a 0% loan, and paid off the loan in eight months.

He’s taken a similar evidence-based approach at work. The Mountain Valley board is supportive, but asks tough questions and insists that projects meet the organization’s needs at the lowest possible price. “As long as I can manage the price point, I usually get the thumbs up,” Juul says.

From greenhouses to heat pumps

From the start, Mountain Valley’s green investments have grown fairly naturally out of its operations. The first impetus – 15 years ago, before Juul’s time – was the organization’s two greenhouses, which double as a skills program and an income generator. Problem was, the cost of running the greenhouses exceeded the income they were bringing in. A small six-panel PV system, funded through a grant, lowered peak electricity costs and made the operation viable.

About seven years ago, Juul resolved to up the greenhouses’ game further, installing a solar-thermal system on the roof to deliver hot water and a system of water barrels to retain heat. The cost of the improvements to Mountain Valley was minimal, thanks to grants from CORE and Toyota. The greenhouses now operate year-round and produce bedding plants, house plants and seedlings that Mountain Valley sells at its own farmstand and at the local farmers’ market.

Around the same time, then-human resources director Dana Peterson led a project to install a more substantial 10kW solar system on the roof of the main building. More recently, in 2018, Sims initiated the replacement of the main building’s old boiler with a new air-source heat pump system. 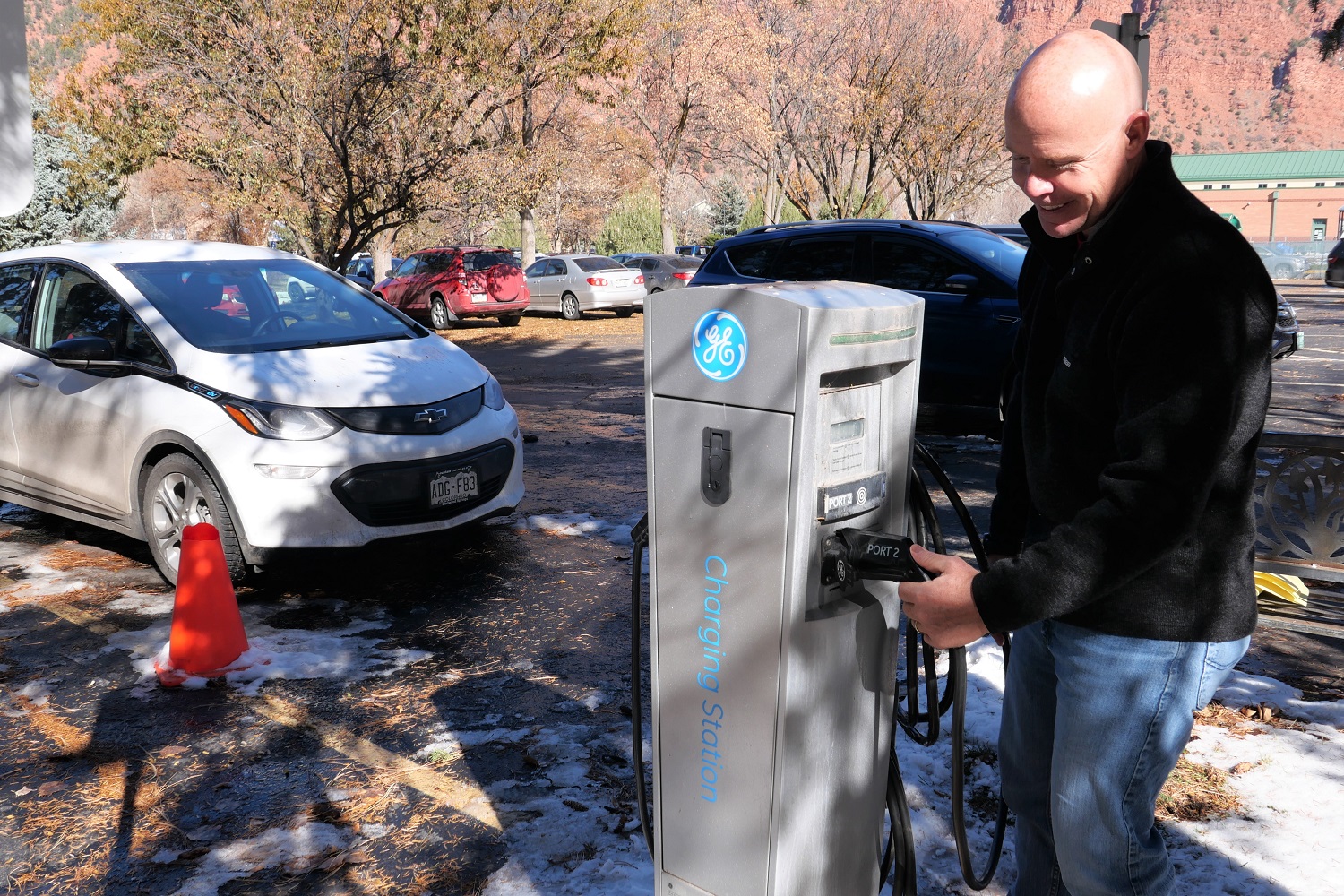 Adam Juul plugs into the charging station at Mountain Valley.

One of Mountain Valley’s biggest costs is transportation, and Juul’s focus for the past several years has been transitioning to an electric fleet. The nonprofit’s vehicles log more than 16,000 miles a month transporting 150 or so clients to and from home, day programs, medical appointments and other destinations.

True to form, he started at home, buying a Nissan Leaf for himself in 2016 to test the economics of electric vehicles. The numbers were good – so good that Juul’s boss, John Klausz, quickly decided to buy one too. Meanwhile, Juul worked with the state’s ReCharge program and CLEER (Clean Energy Economy for the Region, which manages Garfield Clean Energy’s programs and also represents ReCharge) to finance 80% of the cost of installing a two-plug EV charging station in the Mountain Valley parking lot.

With that, Juul was able to make the case to his board to replace two older Priuses in Mountain Valley’s fleet with leased Chevy Bolts. Even without tax credits (as a nonprofit, Mountain Valley can’t use them), Juul calculates that the electric vehicles save $120 per month in fuel costs alone, compared to the Priuses. The organization has since replaced three more of its vehicles with Bolts, and plans to continue switching over to EVs as older vehicles come up for replacement.

The next frontier: finding an electric replacement for Mountain Valley’s 12-passenger, wheelchair-accessible vans. Juul is researching companies that do custom conversions, but holding out hope for an assembly-line model from a major manufacturer.

Juul’s advice to other organizations looking to save energy? “Where there’s a will, there’s a way. We’ve got lots of resources in this valley, like CLEER, CORE, the City of Glenwood, the utilities – take advantage of them.”

It can be daunting, trying to patch together the funding to make a project pencil out, so it helps to have a guide. Juul says he’s turned to CLEER for all of his projects at Mountain Valley. “Now that I’ve done it so many times now, I know what to look for, but I still always reach out to Maisa” – that’s Maisa Metcalf, CLEER’s director of consumer engagement and a Garfield Clean Energy coach.