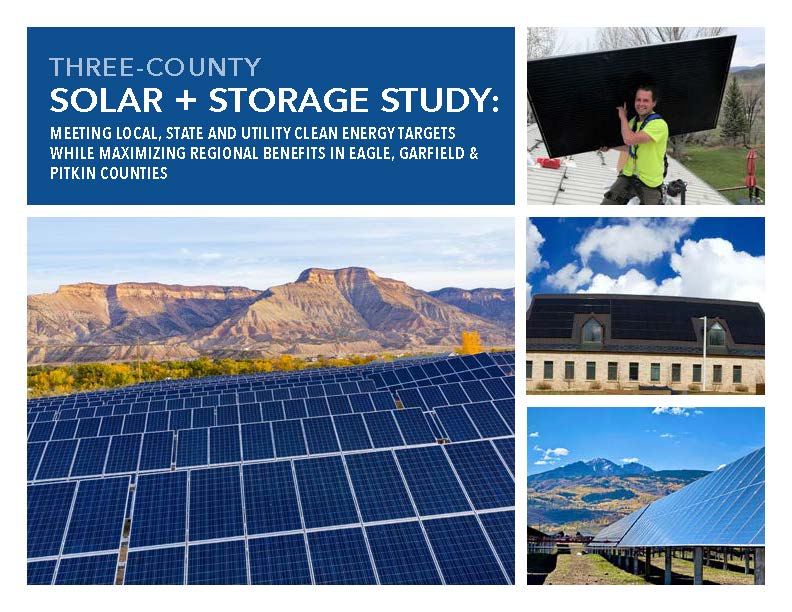 A major new study finds huge potential to expand solar energy in the region, and proposes a detailed action plan to do so.

According to the study, community-scale solar in Garfield, Eagle and Pitkin counties could grow by more than 25-fold and meet nearly a quarter of the counties’ electricity use – a significant step toward achieving their clean energy targets.

The report makes the case that it’s in the region’s economic interest to develop as much solar as possible locally – rather than relying on electricity imported from large-scale projects in geographically remote areas – and explains how combining solar with battery storage will deliver essential grid benefits in the form of flexibility and resilience.

The Three-County Solar + Storage Study and Action Plan, which was partially funded by Garfield Clean Energy, is the product of a collaborative effort of area clean-energy nonprofits, state and local governments and technical advisors. It builds on longstanding regional efforts to accelerate locally produced clean energy both to meet clean energy targets and to diversify the economy.

“What this study shows is that local solar and storage is an important part of an overall strategy for reaching our 100% renewable energy goals in a way that benefits our communities,” said Katharine Rushton, renewable energy program director for CLEER, one of the partners in the effort.

The state of Colorado has set a goal of reaching 100% renewable electricity by 2040, and Holy Cross Energy, whose service area covers much of the three-county region, has committed to that goal by 2030. Most local governments in the region are also aiming for significant reductions in their carbon emissions in the coming decade.

The report is based on the premise that Garfield, Eagle and Pitkin counties are increasingly interdependent, and that it makes sense to plan their energy future together in the same way that they already do for other shared interests such as workforce, housing, transportation and other issues.

The report includes an inventory of energy use and current solar production in the three counties, along with detailed analysis of the market potential of community-scale solar (a.k.a. solar farms). In collaboration with a national mapping firm, the project team created a dynamic solar map and applied various technical criteria to identify suitable private land parcels, and finally narrowed the list of parcels by market limitations that are in play today. All landowners of sites deemed suitable for solar have been contacted to gauge their interest.

The report estimates the market potential for solar in the three counties at 232 MW – compared to just 8.4 MW on the ground today – which, with storage, could meet 23% of the region’s present annual electricity consumption. (Currently, the figure is less than 1%.)

The study dives deep to quantify the value of solar-plus-storage development to the regional economy. It finds that full buildout of 232 MW of community-scale solar plus storage would produce $73 million in local economic benefit from initial construction, plus another $3.2 million annually from land lease revenues, property taxes, operations and maintenance.

In addition, there is the potential for substantial savings on annual energy costs region-wide, and the job creation that comes with more money circulating in the regional economy.

The crux of the report is a comprehensive action plan for local governments, utilities, nonprofits and other stakeholders to accelerate the development of solar and storage. The recommendations cover such aspects as financing, capacity building, regulatory and infrastructure improvements, land use practices, tax policies and incentives, economic development support and training.

The report and an executive summary are downloadable at the website of the Western Colorado Clean Energy Network. The newly formed and growing Network is a collaboration of nonprofit and civic organizations, local governments and other partners working together at regional scale to achieve more rapid progress on shared clean energy goals while maximizing economic opportunity.

The Three County Solar + Storage Study and Action Plan is the result of collaborative work that includes staff from CLEER (Clean Energy Economy for the Region), CORE (Community Office for Resource Efficiency) and Walking Mountains Science Center. In addition, the team worked with technical advisors from the National Renewable Energy Laboratory, RMI and electric utility representatives.

Funding was provided by the Colorado Department of Local Affairs, with contributions from Garfield, Eagle and Pitkin Counties. Garfield Clean Energy also provided significant funding, recognizing the potential of solar energy to diversify the county’s economy while honoring its long history of energy development.