It might look like an ordinary water heater, but to Doug Stewart, the shiny new device in his basement is a strategic upgrade and a savvy investment. It’s also a step toward net zero – and an expression of faith.

This past spring, the time had come for Stewart to buy a new water heater. The gas-fired unit in his Carbondale home was nearly 25 years old. He could have simply replaced it with the same old technology, but a rebate from ReEnergize Garfield County made it affordable to upgrade to a next-level, efficient heat-pump system.

Switching from natural gas to electric water heating also fit in nicely with Stewart’s long-term plan to reduce his family’s fossil fuel consumption to zero. That plan, he says, stems partly from a desire for energy independence and greater control over costs.

But when asked what really motivates him, Stewart says it’s his faith.

“I’m a follower of Jesus, and Jesus gave us two commandments: love God and love your neighbor,” he says. “Loving God is taking care of His creation. And loving your neighbor is also taking care of creation, because the burden of climate change is mostly falling on the least of us.”

Heat pump technology is increasingly entering the mainstream for heating, cooling and water heating. A heat pump doesn’t create heat through combustion or electric resistance; rather, it extracts heat from the air (or the ground) and transfers it to where it’s needed. That’s not only more energy-efficient, it also enables a shift from natural gas to electricity, which is increasingly coming from renewable sources.

Stewart took the first step in electrifying his house 10 years ago, when he installed a small (3.2-kilowatt) solar array on the roof. At that time, he says, he didn’t yet know about heat pumps and had no notion of actually getting to net zero. Mainly, he liked the idea of generating most of his own power on-site and eliminating the energy waste that results from transmitting electricity via the grid.

It was only more recently that Stewart learned that heat pump technology was the missing piece that could allow him to cut ties with fossil fuels, and that his rooftop panels were part of the strategy. Needing to replace the water heater kick-started the thought process: “The thought of powering my water heater from electricity straight off the roof was very attractive,” he recalls.

Then along came GCE’s ReEnergize program this past spring, which offers low- and middle-income county residents a free home energy assessment and rebates for home energy upgrades. ReEnergize approved Stewart for up to $3,000 in rebates on his project.

There were some challenges. For one thing, to work efficiently a heat pump water heater must draw in air that’s warmer than about 40°F. In our climate, most people solve that problem by locating the intake in their garage. Stewart doesn’t have a garage, so he had to put it in his laundry room.

The downside of this arrangement is that the heat pump pulls air from the building’s conditioned space, which means that in winter the furnace has to do extra work to supplement the water heater. That increases natural gas consumption slightly in cold months, but over the entire year the heat pump still works out to be more efficient than a gas water heater, and much more so than a conventional electric one.

On the plus side – and this is a big plus – the heat pump helps cool the house in summer. Running the furnace on fan-only pushes the warm air out and circulates the cooler air that’s the byproduct of the heat pump.

Another challenge was finding expertise. Stewart’s electric utility, Xcel Energy, offers an $800 rebate to customers if they use one of their approved installers, but it turns out that there are no such installers in Garfield County. In fact, there are still few professionals in our area with experience in heat pump water heaters. Stewart ended up finding someone by word of mouth who was licensed in another state, so he had to forgo the Xcel rebate.

As long as he was having electrical work done, Stewart opted to install a Level 2 (220V) electric vehicle charging station on the outside of his house for the EV he had on order. (He’s since learned that his EV won’t qualify for the tax credit he was expecting, so he’s researching other options – but that’s another story.)

So how did it all pencil out? The water heater cost $3,200 (its price went up $800 in the few months that Stewart was considering the purchase), the combined electrical work was $1,000, and installing the new water heater and removing the old one was another $600. Subtracting the ReEnergize rebate of $3,000, the net cost of the project was $1,800.

The new water heater was installed in May, so it will be a few more months before Stewart has a full year of bills to compare his total energy costs. He expects them to be roughly the same, but they could be less to the extent that the water heater uses excess electricity from the rooftop solar. In any case, now he’s got one less gas-powered appliance, he’s EV-ready and he’s thinking about what’s next.

The final and biggest step for Stewart in getting to his goal of net zero will be to replace the furnace. Like the old water heater, it’s original equipment that came with the home so it’s also due for replacement. An air-source heat pump is the obvious way to go, since technology now exists that can operate at temps as low as -20°F.

Stewart still has some homework to do before making that decision, though. It won’t be cheap – the system itself will likely cost upwards of $10,000, and he may have to upgrade his electrical panel as well – which is why he’s eagerly awaiting details on when new rebates through the federal Inflation Reduction Act will become available. As are we all! 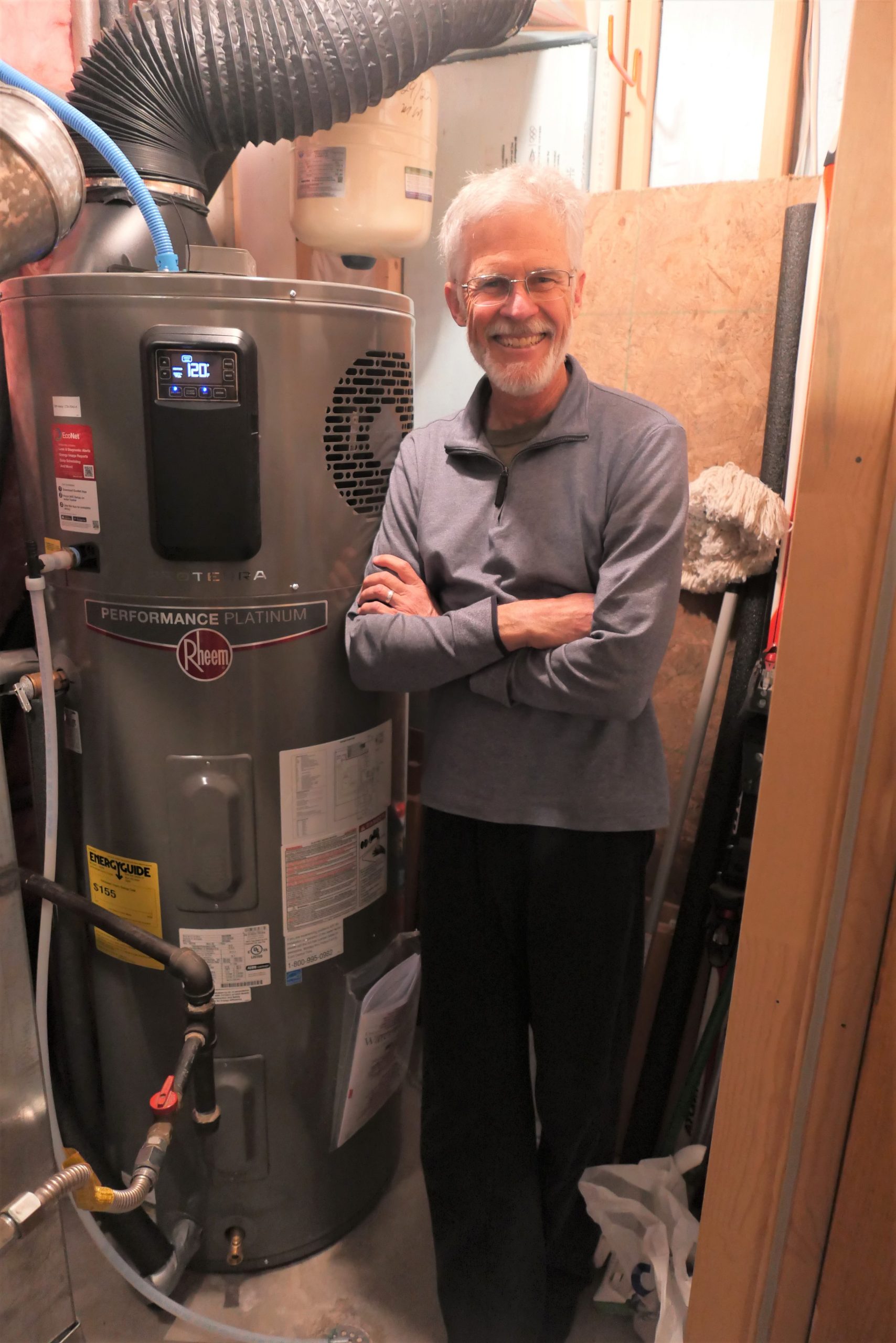