Churches use energy efficiency to be good stewards 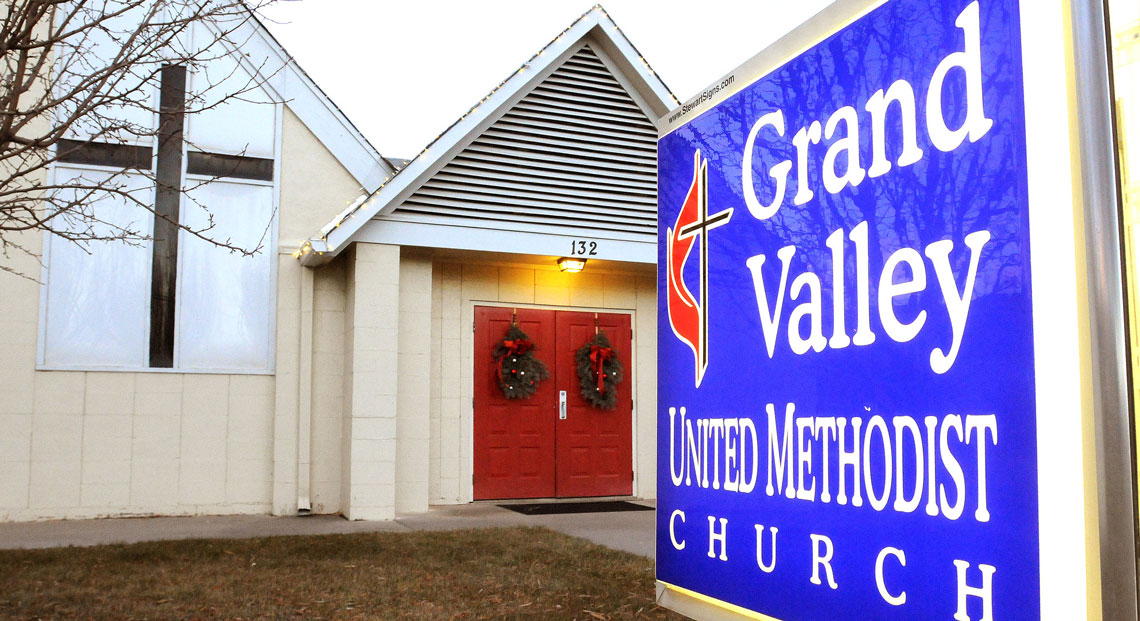 Grand Valley United Methodist Church is one of 10 congregations across Garfield County to make energy efficiency upgrades to lower utility bills and be good stewards of creation.
Photo by Kelley Cox

On sunny days, Bill Cook likes to check the meter that tracks electricity produced by the solar array installed at the First United Methodist Church in Glenwood Springs. If it’s “running the other direction,” he says, it means the church is saving money rather than paying for electricity. Cook, who is the chair of the church’s Capital Improvements Committee, is especially proud on those days.

For church congregations trying to balance their budget and be good stewards of creation, it makes sense to install energy efficiency upgrades and renewable energy systems. Since 2011, Garfield Clean Energy, which is managed by CLEER, has helped 10 church congregations across the county become better energy stewards.

“Churches that save money on energy costs will have more funds to focus on their primary mission,” said Shelley Kaup, an energy coach for Garfield Clean Energy. “They are also practicing good stewardship for the Earth and helping to preserve its resources for future generations.”

Such was the case for First United Methodist, when its capital committee forged ahead with major energy upgrades in 2014. Energy efficiency improvements to the sanctuary roof solved long-standing heat loss and water damage issues. And an 11.3-kilowatt solar electric system will offset about half of the church’s annual electricity use.

“With the solar panels, it was pretty much a win-win thing because that ended up being a savings of 50 percent,” said Cook.

Built in 1940, the church sanctuary has a beautiful interior ceiling, but there was no insulation and no attic where insulation could be placed. Over time, the roof began leaking, damaging the tongue-and-groove ceiling. A full roof replacement would have endangered the planks and exposed timbers and joists -- key interior design elements that church members wanted to preserve.

So Cook consulted with an engineer and architect along with Kaup for energy coaching. The team recommended replacement of the exterior roof with structural insulated panels, or SIPs. The panels created a thick layer of insulation on the sanctuary roof, and created a strong surface for the installation of solar panels.

Most of the solar electric system was paid for through community grants and rebates, with energy coaching guidance from Kaup.

“CLEER made us aware that rebates were available,” said Cook. “It was nice to have people helping us who are closely involved with energy conservation; they know about these programs that are going on.”

The solar electric project qualified for a $12,500 rebate from Glenwood Springs Electric. In addition, the Community Office for Resource Efficiency (CORE) awarded $28,000 through its Community Grant program for the solar array and the roof upgrades.

“I still can’t believe got that much,” Cook said of the assistance from CORE. “We’re hoping to see the [total] cost offset in electric savings not too far off in the future.”

Kaup said the estimated energy savings from both projects are more than $2,000 per year.

“This project is a great example of combining energy efficiency and renewable energy to achieve savings and improve building durability for years to come,” said Kaup. 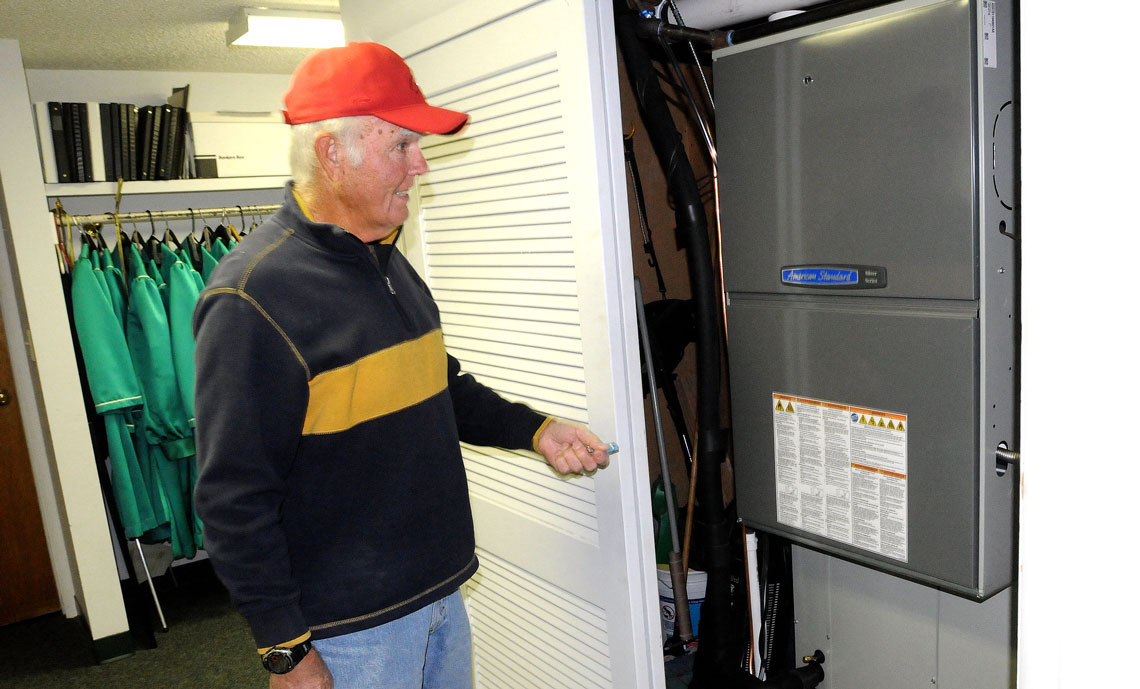 Dan Temple, chairman of the Grand Valley United Methodist Church Board of Trustees, shows off one of two new furnaces at the church in Parachute. The new system will heat the church sanctuary in winter and quietly cool it in the summer.
Photo by Kelley Cox

In early December 2014, Grand Valley United Methodist in Parachute was bustling with workers.

Purdue Heating and Cooling was replacing two old gas-fired furnaces and a swamp cooler with two 95 percent efficient furnaces and a heat pump to manage temperature in the church’s sanctuary.

The old furnaces were located in the kitchen area and in the sanctuary, which seats about 100 people.

“The two furnaces we replaced were in need,” said Dan Temple, chairman of the church Board of Trustees. “This gave us an opportunity to try to improve [the air temperature] and get something that was really efficient, too.”

“The sanctuary also had an old swamp cooler. It was very noisy and we couldn’t use it during service,” Temple said.

At first, Temple thought the church would need to switch over to an air conditioning system. But CLEER Energy Coach Matt Shmigelsky advised Temple to go with a heat pump system, which costs less to operate. The heat pump uses an electric-powered condenser, not gas. It will heat the building in winter and keep it cool in summer. The new furnaces in the sanctuary area will provide backup heat when temps drop below 20 degrees.

Rebates from Garfield Clean Energy and Xcel Energy are expected to help offset the cost of the heating and cooling upgrades. The next energy project for Grand Valley United Methodist is to replace old T12 fluorescent lighting fixtures with LEDs to gain more electrical energy savings.

Although financial savings drove the project, cutting the church’s carbon footprint is a nice bonus. “It certainly makes sense to try to go energy efficient as much as you can. If nothing else, to save our fossil fuels,” Temple said.

Pastor BJ Worthen at First Assembly of God in Rifle says his church congregation has been thinking about energy usage. “It does just seem prudent for us to pay attention to energy consumption and our energy footprint in the community,” Worthen said.

Those conversations prompted a large lighting upgrade at First Assembly in 2011. A church member who owns an auto mechanic shop had tipped Worthen to the more energy efficient light bulbs, noting that rebates could help offset the project cost.

Worthen contacted Garfield Clean Energy, and an energy coach worked through the specs on the building, including the number of light fixtures and bulbs, as well as helping the church apply for rebates.

“They jumped right in there, figured out the rebates, and they were sure a blessing to us,” Worthen said.

With the plan in hand, Worthen hired Rifle Electric to replace 51 T12 fluorescent lights with new efficient T8s. The project in the 20,000-square-foot church was huge, and the company worked for a full week to replace all the bulbs and fixtures.

Two-thirds of the costs were offset by rebates, according to Worthen, and the estimated savings per year is $450.

“Any way we can get some help to pay for a project that big — we’re a small-town church — well, that’s a big deal.” The new lighting, he noted, also “made things brighter and cheerier.”