Repairs after house fire cut energy bills in half 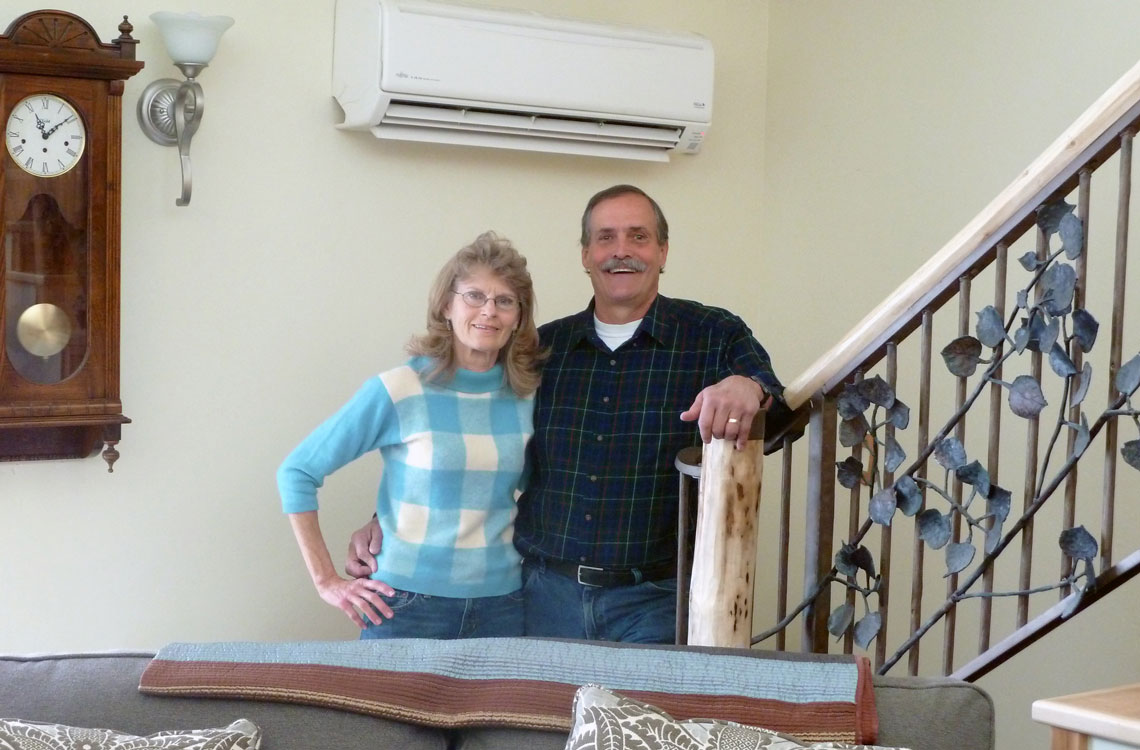 Jan and Keith Giezentanner stand at the foot of the staircase in their living room. Above them is the indoor vent for the heat pump heating and cooling system installed after their house fire.

After an electrical fire charred the interior of their Glenwood Springs home two years ago, Keith and Jan Giezentanner replaced windows, doors, appliances, lights and the heating system with all energy efficient models.

The result is that the couple’s electric bills are half what they were before the fire and their pellet stove consumes two-thirds less fuel. As an extra bonus, they now have a cooling system that keeps the whole house comfortable on baking summer days.

By making smart choices during the six-month rebuilding process, the Giezentanners are saving about $1,000 a year on their combined electric bills and pellet fuel costs.

“It’s worth it to spend a little more out front, because you’re going to get it back,” said Keith Giezentanner.

The fire erupted on Black Friday of Thanksgiving weekend in 2012. Keith and Jan were visiting relatives in Louisiana, and were relying on the electric baseboard heating system to keep the house warm while they were gone. Their neighbor spotted smoke billowing out the back corner of the house that Friday morning, and the fire department arrived in three minutes.

“They think it was smoldering for about two days, and they told us that the temperatures were so high, the house was minutes away from exploding in flame,” Jan recalled.

While she made a habit of cleaning the electric baseboard units twice a year, a build-up of dust and dog hair apparently made the baseboard system catch fire.

“The fire inspector told us that not using the baseboard heaters as the main source of heat may have contributed to more accumulation of dust than if they had been used on a regular basis,” Jan said.

The couple came home to a horrible mess, with broken glass, melted plastic items, a charred sofa and a ruined piano. Everything in the house was smoke-damaged, although the house structure was still intact.

Over the next six months, the couple worked with Ed Puckett, a New Castle contractor, to make major repairs to the interior of the home. They researched options for replacement equipment and materials that would be highly efficient, as well as attractive and durable.

By purchasing highly efficient windows, LED light bulbs, ENERGY STAR appliances and a new heating and cooling system, they qualified for $1,400 in rebates to offset costs.

“It was a real pleasant surprise to get those rebates,” said Jan.

The biggest system change was to get rid of the electric baseboard heating system entirely, and replace it with a mini-split air source heat pump. The unit is in two parts, a condenser that takes up a few square feet on their back patio and a ventilation unit mounted on the wall in their living room.

The Fujitsu electric-powered heat pump can draw heat from outside air down to about 15 degrees. On a recent 20-degree morning, the system was pushing comfy warm air into the room, heating the entire main and second floor.

Their original pellet stove still stands in the corner of the room, waiting for extra-chilly weather. A second pellet stove is in the finished basement, available to heat a guest room and Jan’s craft room when needed.

In summer, the heat pump works in reverse, sending cool air into the home without putting a strain on the electric bill.

In the upstairs master bedroom, a second heat pump was installed. They haven’t yet needed it for heating, but it cools the room in summer and far less costly to operate than the old window air conditioning unit they had before the fire. 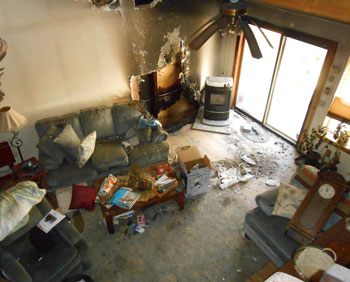 This was the view of Keith and Jan Giezentanner's living room a few days after the house fire in November 2012. The fire started in an electric baseboard heating unit behind the sofa.

While the couple wouldn’t wish a house fire on anyone, they have come out the other side with a more comfortable home.

“We’re very happy with the way things turned out,” said Jan. Their 3,000-square-foot home is also much more economical to operate.

Prior to the fire, electric bills were running about $130 per month, and that was with using the pellet stove as much as possible and burning three tons of pellets per winter.

Now, their electric bills are running $60 to $70 per month, they rely on the heat pump for most heating needs, and they used just one ton of wood pellets last winter.