'Pink Palace' on track to save energy, maintenance expenses in the decades ahead

The Pink Palace is a Glenwood Springs landmark and treasure. Built in 1887, it was touted as the most beautiful building in the city for many years.

In the 1920s it was converted to include five apartments, and was often the first place newcomers to the city lived when they arrived. In the 1960s, it was painted a “Pepto-Bismol pink,” earning it the nickname of the Pink Palace.

Now that it’s undergone an extensive series of energy upgrades and other renovations, owners of the building—and the residents—say they’re saving a considerable amount of money on energy costs.

“We have done a remodel of most kitchens and bathroom, insulated walls and ceilings where ever possible,” said co-owner John Ackerman.

“I expect bills to be less than half, maybe a third, of the past.”

Ackerman and his wife, Marianne, bought the building with Pete Waller, who’s Colorado Mountain College’s facilities director, and his wife, Gina, in the early 2000s.

They all knew the historic building needed upgrades, but as with most buildings, the various efforts had to be weighed against available resources.

After they bought the Palace, the owners replaced the old windows and added insulation. Later, they remodeled all the kitchens and bathrooms, but, Ackerman noted, “even after that, the heating bills were still about $750 a month. The heating system was malfunctioning, and we couldn’t figure out how to fix it.”

In spring 2013 SGM’s Tony Haschke did an energy assessment on the building. Pink Palace owners received a rebate of $500 from the Glenwood Springs Electric Sustainability program to help fund the assessment.

“He was pretty impressed because we’d put all new windows—thermal pane windows—and kitchens and bathrooms in, and insulated everything,” Ackerman said. 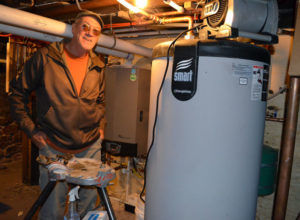 But there was still the issue of the 1920s steam heating system and the 1950s boiler in the basement. The heat was impossible to regulate and windows were always open in the winter.

“We bought the Pink Palace because everyone was kind of afraid of it,” Ackerman said. “I thought, man, we’re taking on a big deal here with this steam heat.”

Ackerman and the co-owners committed to the replacement. After spending $6,000 on basement asbestos removal, a new energy efficient boiler and integrated hot water tank were installed along with zone thermostats in each of the units, so residents can better control their own comfort.

The new boiler and heat system cost $26,917, but Pink Palace owners were able to get rebates for $2,500 from Garfield Clean Energy and $2,500 from CORE damping the expense somewhat.

Now the Pink Palace is on track to save considerable energy and maintenance expenses in the decades ahead, in addition to greatly improved comfort.

It was always Ackerman and Waller’s goal to make the building more energy efficient, and they’re glad they undertook all the upgrades. The upgrades are also something of a theme in the history of the building and its relationship with energy.

It was built by Jared DeRemer, who worked on survey crews for the South Pacific Railroad and moved to Glenwood Springs to oversee the construction of the railroad through Glenwood Canyon. DeRemer also invented the DeRemer Water Wheel — for generating electricity — and was the mastermind behind the Shoshone Hydroelectric Plant in Glenwood Canyon.

“This house is 126 years old and now we have this great modern heating system,” Ackerman said, smiling. “We’re glad we undertook all of the upgrades. So are the tenants who comment that they are much more comfortable now.”