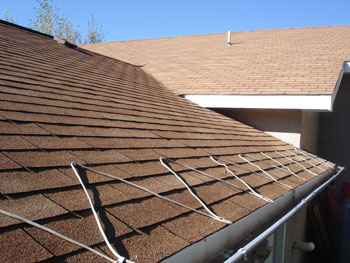 That means each 100 feet of heat tape operating 24/7 can translate to an added monthly cost of $40 to $60 to operate heat tape, says Eileen Wysocki, energy auditor for Holy Cross Energy. Some larger houses and businesses in the region are running hundreds of feet of heat tape.

Customers of Holy Cross and Glenwood Springs Electric can claim rebates on the installation of heat tape timers. Find contact information for local electricians to do the install here.

It may seem counterintuitive, but the best time to run heat tape is during the day. Holy Cross Energy’s residential audit program recommends using a timer to run heat tape from 6 a.m. to 6 p.m. whenever snow or ice is sitting on the roof.