Not so long ago, you’d be out of luck if you wanted to explore the Western Slope in an electric vehicle. Charging stations were few and far between, so EV drivers were limited in where they could go and couldn’t be sure how long it would take to get there.

The situation has improved dramatically in the past few years, thanks to the work of state agencies, local governments and nonprofits, and helped along by money from a legal settlement over Volkswagen’s diesel emissions scandal. Venturing beyond the I-70 corridor need no longer produce range anxiety, given the growing number of charging stations along the state highways that cover most of our sprawling region. 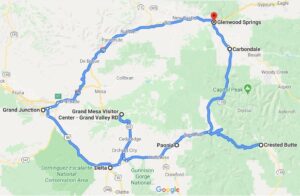 A map of the road trip.

For example, it’s now possible to make a 340 mile-loop out of Glenwood Springs into the heart of the Western Slope and never be more than 50 miles from a public charging station.

Glenwood itself is well supplied with chargers: there’s the Tesla Supercharger behind the Residence Inn on Wulfsohn Road and the recently installed Level 3 fast-charger in the nearby Target parking lot, not to mention several Level 2 chargers downtown (including three that went into service just last week).

(The first two types are able to recharge an EV battery in less than an hour, which is what you need at least once a day on a long-distance trip. Level 2 stations are slower, making them better for charging while parked for longer periods; they add 20 or so miles of charge in the time it takes to make a meal stop. An advantage of Level 2 stations is that they’re often free, as is the case with the ones in downtown Glenwood. For more info, see our Electric Vehicle Charging 101 page.)

South of Glenwood, Highway 82 is a well-beaten path for EVs, with fast-charging available in Carbondale, Basalt and Aspen. The Carbondale charger, which went live in May, is located near the junction of Highways 82 and 133, with plenty of snacking and dining options nearby. Like many of the stations highlighted in this article, it was installed by the town with grant funding from the state of Colorado’s Charge Ahead program and assistance from local nonprofit CLEER, which runs Garfield Clean Energy's programs.

South of Carbondale, Highway 133 is the gateway to the West Elk Loop Scenic Byway, a spectacular route that travels up the Crystal River Valley and over McClure Pass to Paonia; another branch of the byway takes you over Kebler Pass to Crested Butte. Either way, it’s no sweat in an EV because new fast-chargers await in Paonia and CB.

Descending into the adobe badlands west of Paonia, you might wonder where your next charge will come from. Never fear – there’s a fast-charger down the hill in Delta, installed last year. And if you choose instead to take the scenic route north over the Grand Mesa, you’ll have your choice to top up at the Pioneer Town Museum in Cedaredge or at the visitor center near the summit. Both locations recently installed brand new Level 2 chargers.

After the battery-sapping ascent up the Mesa, it’s a long, easy glide down to Grand Junction, where you’ve got abundant charging options. Just in the past year, a fast-charger has been added at Sam’s Club out by the mall, and several new Level 2 devices have been installed downtown and in the emerging Las Colonias Business Park along the Colorado River just south of downtown.

A full charge in Junction should give you more than enough juice to get back to Glenwood. But if you need to make a stop along the way, Parachute, Rifle, Silt and New Castle all now have Level 2 stations, which are generally sited close to the exits.

Without much fanfare, the Western Slope’s network of charging stations is expanding at a busy pace, taking the worry out of EV road trips around the remoter parts of our region. The building boom is expected to continue for at least the next year, fueled by VW settlement money (see this map showing expected new fast-chargers projected to be installed this summer in a number of Western Slope locations including Rifle, Montrose, Dinosaur, Craig and Steamboat). For the latest updates on live stations, check the convenient map and resources at www.plugshare.com. 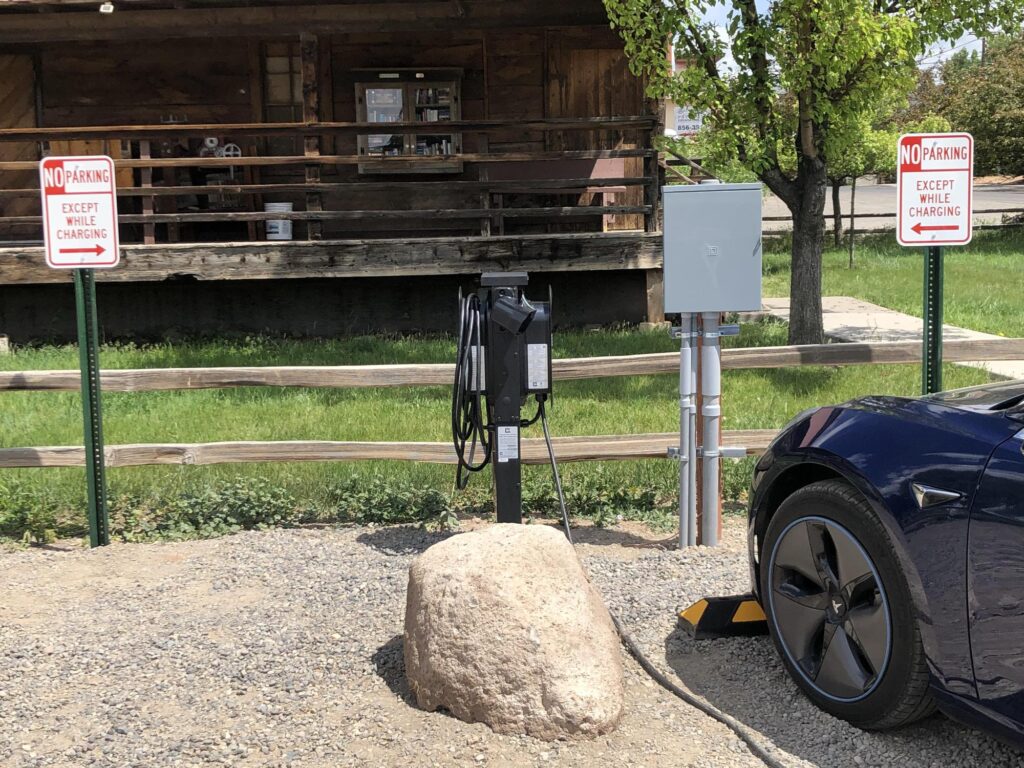 Yep, you can now charge while you check out Pioneer Town in Cedaredge. 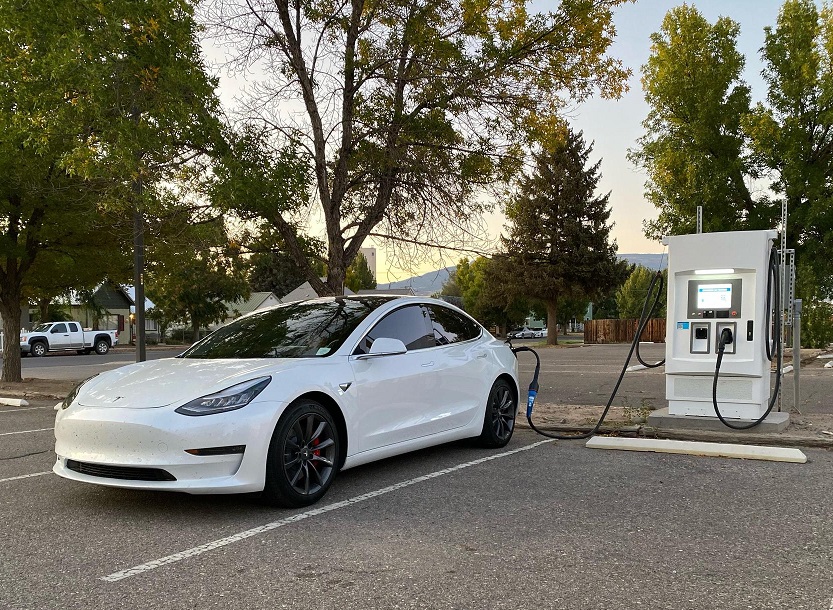 And Delta now has a Level 3 fast-charger, where you can fill up in the time it takes to have a picnic at Confluence Park.