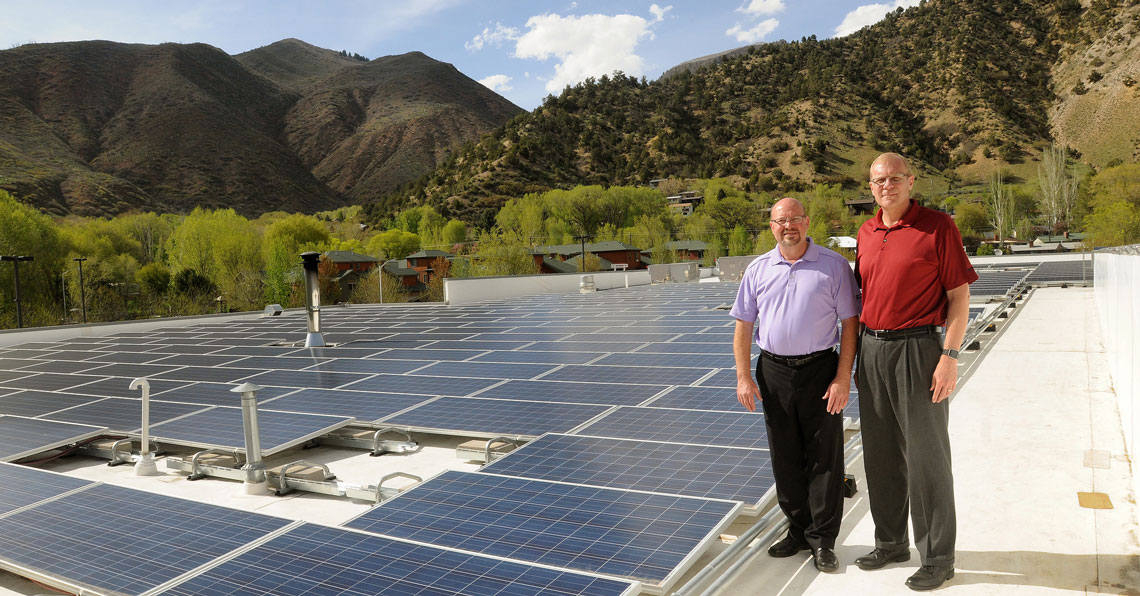 Carroll Winkler, left general manager of Glenwood Springs Subaru, and Steve Nilsson, right, co-owner, show off the solar array installed on the roof of the auto dealership at 175 Storm King Road in Glenwood Springs. The array was installed in November 2015. Photo by Kelley Cox

On May 13, 2016, Glenwood Springs Subaru hosted a “solar reveal” party to celebrate the new solar energy system helping to power the auto dealership.

There was just one hitch. The solar panels, capable of generating 96 kilowatts, are tucked neatly out of sight on the roof of the building, and can’t be seen from ground level. Although the solar panels are hidden from view, the electricity they produce cut the dealership’s monthly electricity bill by 44 percent.

Installed in November 2015, the solar project is the latest in a series of clean energy upgrades for Subaru and its sister dealership, Glenwood Springs Ford, said Steve Nilsson, co-owner of the two dealerships.

For each project, free energy coaching provided by CLEER, through its work for Glenwood Springs Electric and Garfield Clean Energy, helped guide Nilsson in making smart choices about projects. 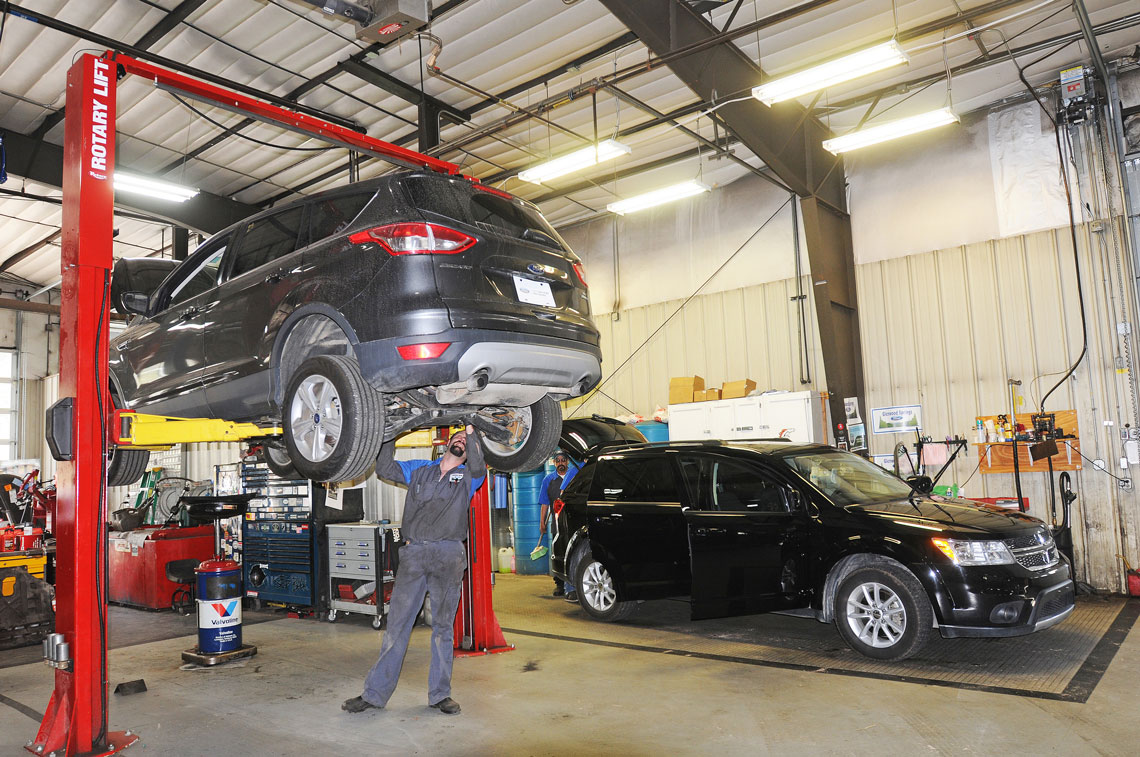 Technician Levi Leger works on a vehicle in the service department at Glenwood Springs Ford. New LED light fixtures deliver a bright, natural light while using much less energy than the old fluorescent tube lights that they replaced.
Photo by Kelley Cox

The upgrades at Subaru were inspired by a series of lighting upgrades at Glenwood Springs Ford in 2012, 2014 and 2016. Upgrades to LEDs in the Ford dealership’s parking lot, service shop, parts department and showroom have cut electrical use by 20 to 25 percent, said Nilsson.

Electric bills for the dealership have continued to rise because of rate increases, he noted.

“We are still dollars ahead,” Nilsson said. “Had we not moved to consuming less, we’d be spending a lot more.”

As businesses all over Garfield County are experiencing with LED upgrades, the energy efficient bulbs deliver high quality light.

“It’s a brighter, softer and more natural light,” Nilsson said. Through the upgrades, fewer and smaller ceiling fixtures are delivering more even lighting that gets into the dark corners.

“We had so many blind spots,” said Misti Myers, who works the sales counter for the Ford parts department. “We had to turn on all the lights to see anything.”

She explained that the electrical contractor, Green-Tech Electrical, installed an additional circuit and switch for an upstairs storage area that allows those lights to be turned off. The new LED fixtures fully light the ground level parts area, and Myers doesn’t need the upstairs lighting except when she goes upstairs.

“The LEDs perform so much better,” she said. “There’s no flickering like the old fluorescents. We used to get headaches, and there’s nothing like that now.”

The other significant benefit is reduced maintenance.

“These LED bulbs will last 10, 15, even 20 years,” said Nilsson. “The old metal halides we had outside in the parking lot had to be replaced every year. Since we went to LEDs in 2012, we haven’t replaced one.”

Replacing bulbs was an expense and a hassle throughout the dealership, between getting up to the high ceilings and the disruption to work. That’s no longer a concern.

The company also upgraded the Ford dealership’s heating and cooling system during a major remodel in 2013, after getting a commercial energy assessment from SGM.

Prior to the remodel, the building had nine condensers on the roof for cooling, Nilsson said, and several rooftop units for heating. Now, one highly efficient rooftop unit controls heating and cooling, and the building temperature stays consistent and comfortable.

“It was bad,” Myers said of the old heating and cooling system. “In the winter, we’d sit in here wearing our jackets.”

The 96 kilowatt solar array is mounted on the roof of the Glenwood Springs Subaru dealership at 175 Storm King Road in Glenwood Springs, Colo. The array was installed in November 2015 by Prospect Electric of Rifle, Colo. This is a view of the array looking east. Photo by Kelley Cox

Economics of the upgrades

Nilsson and his partner, Jeff Carlson, invested significant sums in these projects, which are offset in part by rebates and, for the solar system, federal tax credits and accelerated depreciation.

The solar power system at Glenwood Springs Subaru, installed by Prospect Electric of Rifle, was the biggest investment. The $236,000 project was offset by $13,000 in rebates from Glenwood Springs Electric and CORE, and it’s expected to deliver more than $12,000 per year in cost savings.

Glenwood Springs Electric offers rebates through its Sustainability Program to encourage energy efficiency and reduce electric demand. This helps the municipal utility’s budget and helps the city reach its climate and energy goals.

Moreover, Glenwood Springs Subaru can take advantage of the 30 percent federal tax credit and an accelerated depreciation schedule. With the rebates, utility cost savings and tax benefits, the system will pay for itself in less than 13 years – and will continue to deliver electricity for many years after.

“What makes these arrays possible is the tax credits and the depreciation,” Nilsson said. “Without that, it takes too long to pay back. Until renewable energy projects get to a point where they make sense financially standing alone, there has to be a partnership between government and private entities.”

Subaru is the third local auto dealer to employ solar, along with Berthod Motors and Mountain Chevrolet.

For the lighting projects at Glenwood Springs Ford and Subaru from 2012 to 2016, the company invested $72,000. About 24 percent of that was offset by rebates from Glenwood Springs Electric and CORE. Electrical savings are estimated to be about $13,500 per year.

With the rebates and avoided utility costs, the lighting upgrades will pay for themselves in four years.

“We did see an economic benefit for these projects, once we crunched the numbers. There’s been a benefit to our staff and customers with improved lighting, and in the end, it’s good for the environment,” Nilsson said.

“We know what we do has an impact on the environment,” he said. “If we can offset those impacts in other ways, then it’s our responsibility to do that.”