The phrase “affordable housing” has become something of an oxymoron in Garfield County, and the actual thing, where it can be found, is a highly prized commodity.

So when Habitat for Humanity Roaring Fork broke ground for its latest project in south Rifle, in early March, the mood was one of communal joy and relief. Speakers of all political stripes praised Habitat for its work in developing Wapiti Commons, which will provide 20 deed-restricted townhomes and condos for working families and seniors. 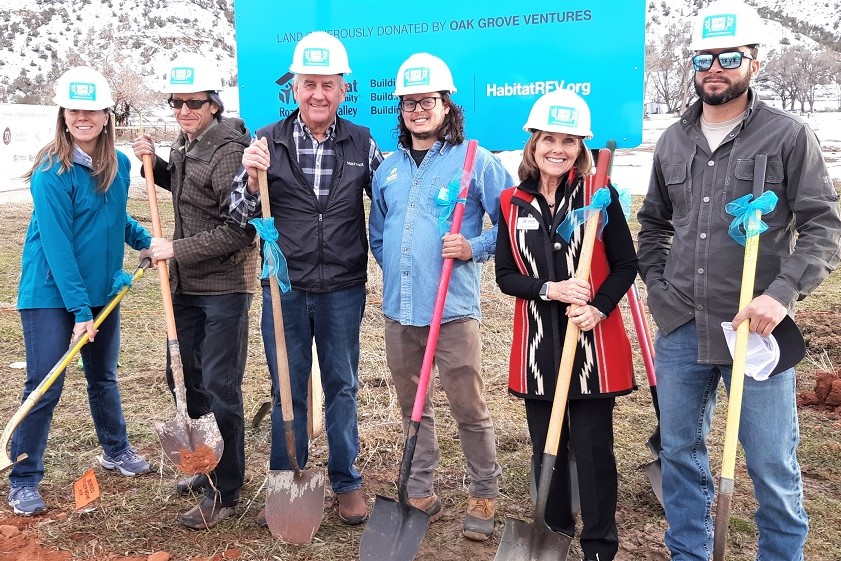 The enthusiasm was doubly justified, because this housing will be affordable in more ways than one. Not only will the units cost much less to buy than comparable free-market housing – they’ll also cost less to live in, thanks to energy efficiency and renewable energy built into their design.

“These homes can set families up for success with predicable energy costs long term, as Habitat is truly committed to creating homes for the Rifle community that are affordable, energy efficient and meet net zero standards," said Gail Schwartz, President of Habitat Roaring Fork.

Clean Energy Economy for the Region (CLEER), which runs Garfield Clean Energy’s programs, advised Habitat on making Wapiti Commons as energy-efficient as possible within the project’s frugal budget. As interest in high-performance design grows, GCE is increasingly providing energy consulting to new multi-family developments and other construction projects in the county.

“They really worked hard to do the right thing,” she says. “They kept sight of the efficiency goal through the whole process.”

While Habitat spent slightly more up front, she adds, “they have planned nicer homes in order to have lower ongoing costs for the occupants.”

Habitat used all the levers at its disposal to keep the sales prices affordable for buyers earning just 80% of the median average income, according to Jeff Corn, Habitat Roaring Fork Valley’s communications and capacity building manager. The land was donated by local developers. Grants, city fee waivers and revenue from the local ReStore will subsidize the project. Efficient site planning and innovative panelized construction will help keep costs low. And of course buyers will contribute 250 hours of “sweat equity” for their homes. Deed restrictions will ensure that the units remain affordable when they’re eventually resold.

Some of the strategies that make Wapiti Commons’ units more affordable to buy will also make them more energy efficient and therefore more affordable to live in. Most obviously (but often overlooked) is the simple fact that smaller housing units require less energy to heat and cool. Additionally, townhomes and condos tend to be more energy efficient than detached homes because they have fewer exterior walls. Another important but underappreciated aspect of affordable housing is that it enables people to live closer to their workplaces, thus saving money on fuel (as well as reducing traffic and increasing time spent with family).

The panelized construction made it more affordable to beef up insulation in the walls and roof, which will reduce heating and cooling needs. This helped fulfill the design team’s commitment to meeting the requirements of the 2021 International Energy Conservation Code, rather than merely building to the 2009 standards in Rifle’s current building code. (It’s common for towns to be several years behind in adopting the latest energy codes.)

On top of that, Habitat opted to go all electric with Wapiti Commons, having proven the concept with its 2020 Basalt Vista project in Basalt. An all-electric home has no gas appliances, nor even a gas line, so it emits no greenhouse gases directly, which is one of the preconditions for net-zero status (more about that later).

Instead, heating, cooling and hot water at Wapiti Commons will be supplied by high-efficiency heat pump systems. A heat pump operates on the same principle as your refrigerator, using an electric motor to compress refrigerant in a closed loop to add or extract heat from a space. For cooking, the homes will have electric induction cooktops. For ventilation, they’ll use energy recovery ventilators, innovative devices that prevent heat (or cooling) loss without the need for ducting. In addition, all units will be “EV ready,” meaning their electric panels will be configured for easy installation of a home electric vehicle charger.

Altogether, McCullough projects that these measures will make Wapiti Commons homes 14% more energy efficient than a comparable one built to Rifle’s current code. And while you might expect an all-electric home to cost more to run than one with natural gas, McCullough’s modeling indicates that Wapiti homeowners will still come out ahead on their monthly bills.

How much will they save? To answer that question, we have to factor in one final energy feature built into Wapiti Commons: it will be powered by electricity from a solar farm by Pivot Energy, with discounted electricity rates under an Xcel program for low- to middle-income households. In the final analysis, residents are projected to pay an average of $50 a month for all their home energy needs – 32% less than in a conventional unit of the same size.

While buying into a solar farm will help lower energy bills, an on-site (rooftop) solar system would have nearly eliminated them. Habitat was able to secure grants to do that at Basalt Vista, but comparable funding isn’t available in Rifle. Project manager Jake Ezratty says it’s not a hard “no” on rooftop solar, but rather a “not yet” as the homes will be built solar ready.

Habitat Roaring Fork has publicly stated a goal of developing net-zero housing, and it is making the case that Wapiti Commons qualifies for that status. The concept of achieving net-zero emissions – whether in a home, a utility grid, a country or the world – has become one of the defining measures of success in addressing climate change.

Clean energy professionals don’t all agree on whether a project powered by off-site renewable energy should be considered net-zero. Some would say the project can’t claim credit for generating its own power off-site because the owner of the solar farm is already claiming renewable energy credits for it. Yet Wapiti Commons won’t be emitting any greenhouse gases itself, and it will be getting all its power from a solar farm that also doesn’t emit. If that’s not net zero, it’s pretty darned good.

And if Habitat can pull off such an advanced project – affordably – then that should throw down the gauntlet to housing departments and developers in our area.

Says McCullough: “People are struggling to provide energy-efficient housing to low- to middle-income households all over the country. Habitat for Humanity is doing just that.”

If you’re interested in finding out how efficient design and renewable energy can enhance the value of your project, contact Heidi McCullough for a free consultation.