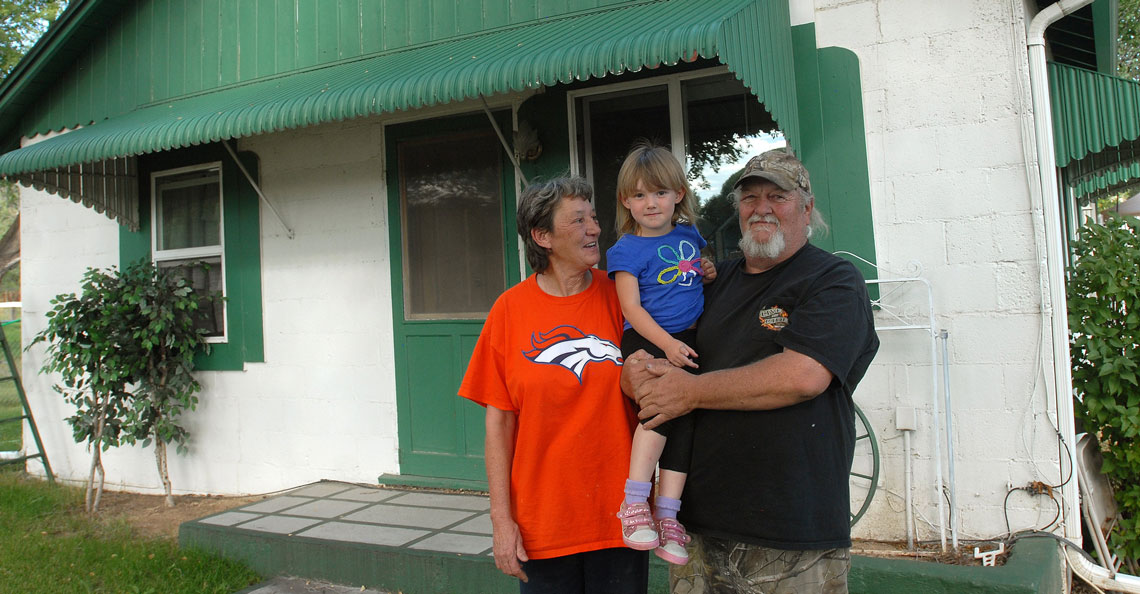 Pat and Larry Tiffany, with their granddaughter Lilly, at their home in Silt.
Photo by Kelley Cox

Pat Tiffany used to be afraid to go into the basement of her home in Silt for fear of the “fire-breathing dragon” — a furnace circa 1920 that originally burned coal. Although it had been converted to run on natural gas, the unit was still scary.

But thanks to Climate Control Co. and its “Oldest Furnace” contest, the Tiffany family now has a new, high-efficiency gas furnace ready to keep their home warm this winter.

Their old furnace was so cranky and unpredictable that Tiffany and her husband, Larry, didn’t use it. For the past two winters, the Tiffanys used a series of electric space heaters to keep the house warm.

“We bought the house about two years ago and when we were looking at the house, the real estate agent took us to the basement. When I saw that thing, I said, ‘Oh please tell me that’s not the heater,’ ” she recalled.

One of the scary things about the old furnace was its huge pilot light, about 6 inches tall and 3 inches in diameter. It would rumble the floor when it would kick on, and it ran exceptionally loud.

“If you were in the basement and that thing kicked on, you would run,” Pat said. “I never went down there. I thought it was dangerous. I thought, ‘If that thing ever blows up, we’re not [even] going to know.’ ”

So the Tiffanys made do with space heaters scattered around their home until 2014, when Pat heard about Climate Control’s “Oldest Furnace” contest. The competition was straightforward: The household in the Garfield, Eagle or Pitkin county that had the oldest furnace would get a new one installed at no cost.

According to Climate Control sales manager Chris Allen, the contest was a way to raise awareness about energy efficient residential furnaces, and gave the company a boost during the normal spring downtime. To enter, residents applied online and a Climate Control tech came to their home to examine the furnace and take photos.

The “fire-breathing dragon” furnace in the Tiffany family’s basement dated to the 1920s, and was originally fueled by coal. Photo by Climate Control Co.

Pat Tiffany didn’t waste a day to enter what she had nicknamed “the fire-breathing dragon” into the competition. She was among 81 residents in the three county-area who entered.

“It was pretty big, as far as interest goes,” Allen said of the contest. “We actually had to extend the date of when to announce the winner, because we had so many entries we couldn’t get to all of the homes,” he said. Each visit included a quote for the cost of a furnace replacement or work that would improve the heating system.

In the process, Climate Control technicians found numerous homes in the region with furnaces that are 40 to 60 years old. Most hadn’t been maintained in a long time. Those old furnaces should be replaced, Allen says, because they simply weren’t made to operate that long.

Energy coaching, incentives and loans can help other families

Additionally, Allen said homeowners often weren’t aware of hundreds of dollars in incentives offered by Xcel Energy and SourceGas, and by community organizations such as Garfield Clean Energy and CORE, that can help pay for furnace or boiler upgrades and for furnace maintenance and tune-ups.

CLEER Energy Coach Matt Shmigelsky has also started coaching the Tiffany family to decide what other energy upgrades they should consider next for their home.

For the other 80 households that entered the “Oldest Furnace” contest, Allen said this combination of energy coaching, incentives and financing can help families get an aging furnace or boiler replaced before winter.

Furnace dated back to 1920s

When the Climate Control team saw the Tiffany furnace, they were pretty sure it would win. But they continued assessing all the other entries, so homeowners could move forward with upgrades if desired. (Contest or not, Climate Control offers free estimates.)

The Tiffany’s furnace won “because they had the oldest furnace I have seen. I emailed the manufacturer a few pictures, and they sent a response back that it was made in the 1920s,” said Greg Knudsen, the company’s comfort specialist.

It was a gravity furnace that originally burned coal. With these old designs, coal is placed into the combustion chamber. The firebox heats the surrounding air before it rises into the upper levels of the dwelling through ductwork. Vents are attached to the ductwork throughout the home, and the hot air is released into the various rooms.

Because the firebox of a gravity furnace needs to heat up first, it takes about 15 minutes before the heat flows up into the living space.

The Tiffany’s furnace was intact and running, which was a stipulation of the contest. But Allen said safety was an issue with the old unit., and he understood the family’s decision to use space heaters.

“They were in dire need of a furnace that they could operate safely,” he said. “I just really felt like, ‘Man, I’m glad these guys won.’ I didn’t really realize before that they didn’t use the furnace because they were afraid of it.” 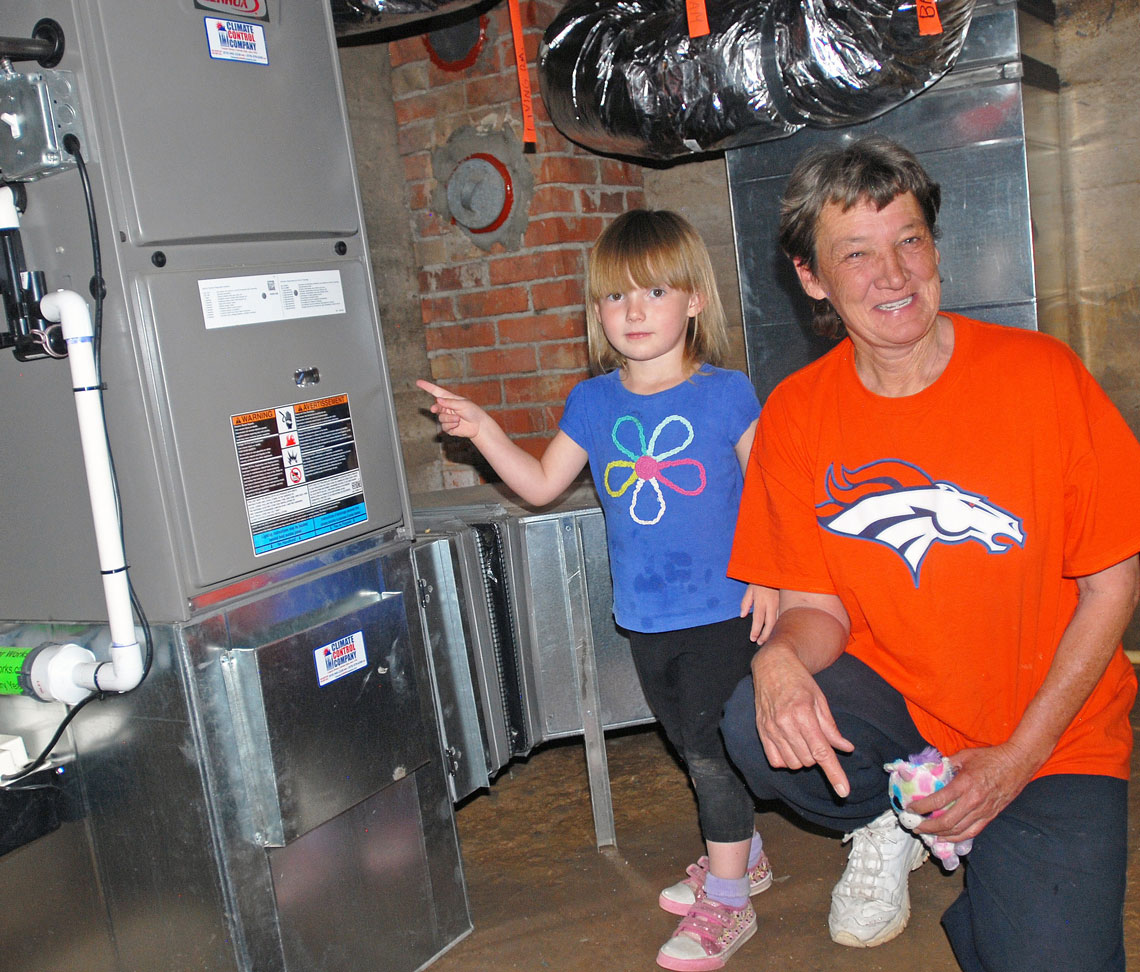 Pat Tiffany, right, and her granddaughter Lilly Tiffany, 3, show off the new high-efficiency furnace in the basement of their home in Silt. The family won Climate Control Co.’s “Oldest Furnace” contest. Climate Control installed this new furnace at no cost.
Photo by Kelley Cox

Climate Control notified the couple in March with flowers and balloons and began work within the month. Prior to digging in, technicians ran heat-load calculations to determine the size of furnace needed for the 1,050-square-foot home and began removal of the dragon.

Allen says it’s a common misperception that the bigger the furnace, the better, no matter the size of the home.

“We sized the furnace for their house. It uses about half the gas as the one that was there. When it burns, it burns less and puts more heat into the home,” he said.

The new furnace is a Lennox ML195, with a 95 percent AFUE rating. The dragon ran at about 55 percent efficiency “at best,” according to Allen.

Usually this kind of upgrade saves a household 30 percent in heating costs. Since the Tiffanys didn’t run their old furnace much, they may see a rise in gas use, but their electric bill will drop because they won’t need the space heaters. Moreover, the new furnace will be safe and efficient.

The total value of the furnace, asbestos and ductwork completed by Climate Control was $7,500.

“It’s beautiful. We never expected it to be this fantastic,” said Pat Tiffany. “If you want quality work and quality merchandise, Climate Control is the one you need to call. They are a very wonderful company.”

Tiffany is no longer afraid of going into her own basement, and has even started using the shelving in the furnace room. The best part is looking forward to a cold winter when she will do some knitting and keep her toes toasty in a warm home.