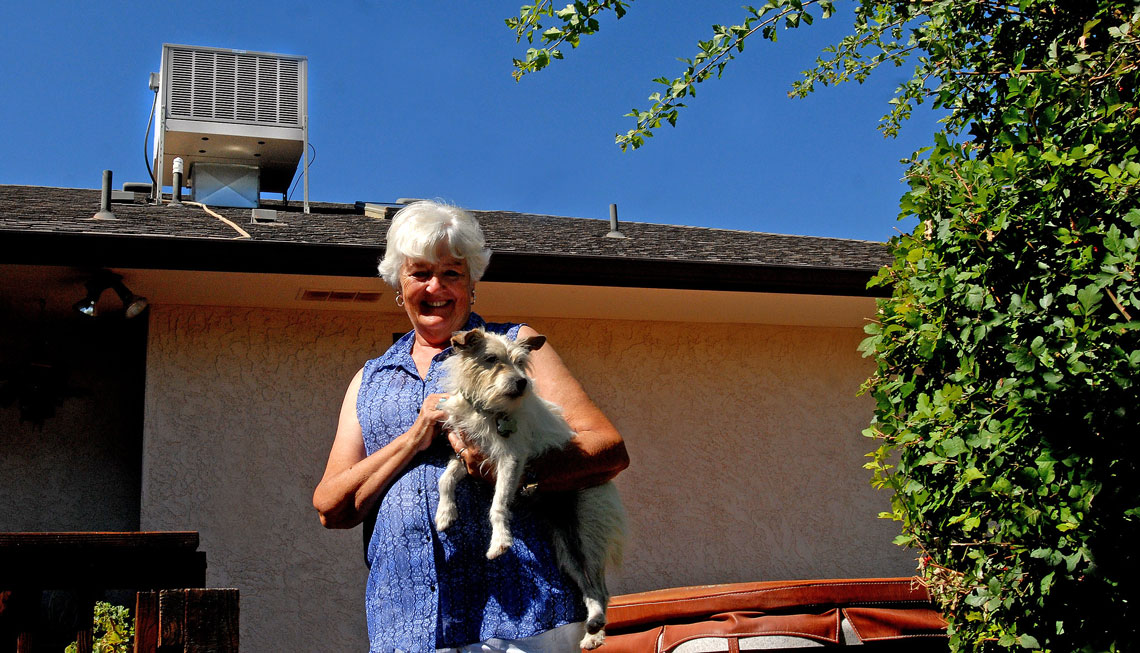 Battlement Mesa homeowner Michelle Foster had two small air conditioning units mounted in the walls of her living room and bedroom. “They really did a terrible job of cooling. I had to supplement them with six fans around the house. It was hot.” Foster said. After A-1 Heating and Cooling installed the new evaporative cooler in 2014, she got rid of all but one fan, which is sitting in storage as a backup.
Photo by Kelley Cox

No longer willing to settle for uncomfortably hot homes, Garfield County residents are choosing high-efficiency evaporative coolers over air conditioning as an economical and environmentally friendly choice to keep cool in the summer.

When Rifle resident Richard Eberle accepted new work hours a year ago, his bedtime routine changed, and he had to go to sleep at 7 p.m. But the old conventional swamp cooler in his 1,800-square-foot tri-level home wasn’t cooling the house sufficiently by that time in the evening.

“I had trouble sleeping because it was so hot in our master bedroom. We needed to do something, and last summer was so hot,” Eberle said.

In August 2013, he decided it was time to make a change to his home cooling system. With guidance from CLEER Energy Coach Maisa Metcalf, Eberle replaced a 10-year-old conventional swamp cooler for a new high-efficiency evaporative cooler. The change was immediate.

“Our house has never been hot like that again. The new unit helps cool the entire house right. If it gets too hot, you adjust it with the thermostat,” he explained.

Evaporative coolers have become a popular way for people in Colorado to cool their homes. Residents from Parachute to Glenwood Springs, in particular, are catching on to this trend.

A $500 rebate from Garfield Clean Energy and $1,000 from Xcel Energy was a “big incentive” for Eberle and his wife to get a new evaporative cooler. “It cut the cost more than half,” he said.

Eberle hired Mountain Air Mechanical of Rifle for the job, which included installation of new ducts to the bedrooms and an extra vent in an upstairs hallway.

“They did an excellent job of installing it for me. I was very happy with the quality of work that they did,” Eberle said. “It’s quality equipment, too, which I appreciate.”

Due to the additional vent work, the project took a little more time and Eberle also hired a drywall contractor for the sheetrock finishing. But he said it has been well worth it.

“Now I can sleep more comfortably. Our whole house is enjoyable right now. Before we got it put in, we’d spend so much of our time in our family room. Trying to cook a meal in kitchen was so unbearable. Now we can cook without it getting too hot.”

Evaporative coolers on the market today are much more efficient even than those sold 10 years ago, delivering a lot more cooling for fewer dollars. 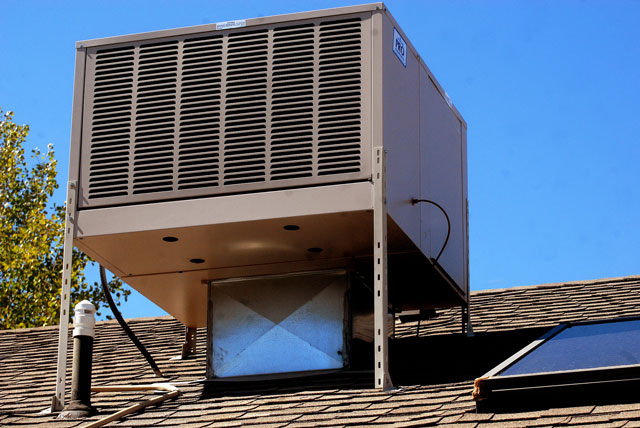 An evaporative cooling (EC) unit draws in hot air, moving it over a water-saturated pad (made of natural or synthetic fibers) where the natural evaporation process takes place. The return air can be up to 30 degrees cooler.
Photo by Kelley Cox

High-efficiency evaporative coolers ‘do a much better job’

An evaporative cooling (EC) unit draws in hot air, moving it over a water-saturated pad (made of natural or synthetic fibers) where the natural evaporation process takes place. The return air can be up to 30 degrees cooler. Compared to air conditioning units, these systems use no refrigerants that can harm Earth’s ozone layer, and they operate more quietly.

Fergen added that new EC units hold only three gallons of water, compared to 12 gallons for older models, and they flush out regularly, preventing the units from rusting. The other benefits: evaporative coolers use less than one-third the energy of air conditioners and cost about half as much to install.

“It's actually become fairly inexpensive to install one of these high-efficiency EC units, and they do a much better job,” Fergen said.

When the newer models were first released, Fergen bought one and installed it in his Rifle home to give it a test run. He was blown away by the improved performance. On a 100-degree day it could knock the temp down to 68 degrees. “A box cooler would never do that,” he said. 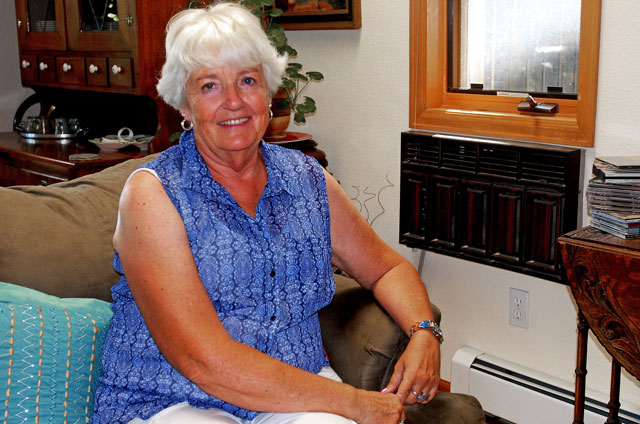 Michelle Foster enjoys her cool home during the hot months of summer.
Photo by Kelley Cox

Battlement Mesa homeowner Michelle Foster wonders why she waited so long to make such a change in her home. She had two small air conditioning units mounted in the walls of her living room and bedroom.

“They really did a terrible job of cooling. I had to supplement them with six fans around the house. It was hot,” Foster said.

After A-1 Heating and Cooling installed the new evaporative cooler this past May, she got rid of all but one fan, which is sitting in storage as a backup.

“I keep wondering why I didn’t do this years ago,” Foster said. “My mother was in the house before me, and she didn’t seem to mind it too much. I’ve been here about seven years and every year I’d say, ‘Next year I’m doing this if I possibly can.’ This year I decided, well, I wasn’t getting any younger and it’s not getting any cooler.”

She, too, worked with Energy Coach Maisa Metcalf, and started with an energy assessment for her home. Using the report’s recommendations, she also purchased a high-efficiency washer and dryer. For the roof-mounted evaporative cooler, Foster received a $500 rebate from Garfield Clean Energy, and also applied for a $150 rebate from Holy Cross Energy.

Foster said the work wouldn’t have been possible without the support of CLEER and the rebate program.

“It was so simple and fast, and everybody was so easy to work with. I’ve been singing their praises and telling everybody about my swamp cooler and appliances. I just can’t say enough good things about the whole thing,” she said.

Foster also has noticed a distinct reduction in her electric bill. Compared to last year, she said, it’s almost half. Other than the washer/dryer, she has not made any other changes to the home.

“I have to attribute it to the new cooler. I didn’t realize how inefficient those old air conditioning units were; not to mention noisy,” Foster said.