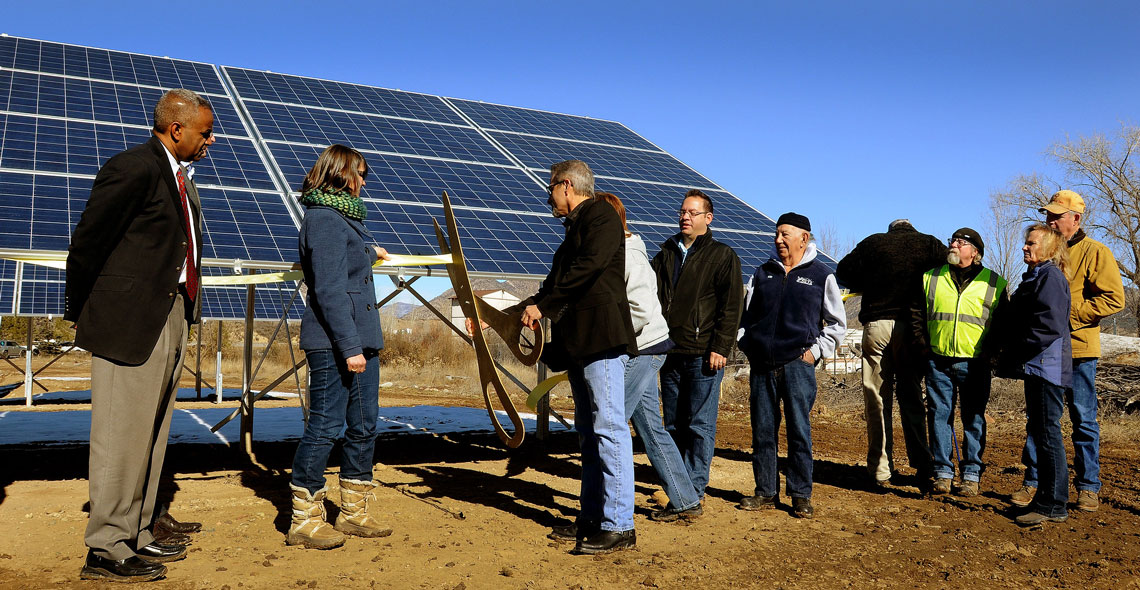 Under a sunny blue sky at midday on Jan. 22, 2015, Silt Mayor Rick Aluise wielded giant scissors to cut a ribbon for the new solar array at the town’s water treatment plant.

The 756 solar panels mounted on seven rows of steel racks will produce 234 kilowatts to supply 100 percent of the plant’s electricity needs on an annual basis.

“It’s the fruit of a long process,” said Aluise, “and quite a partnership between private enterprise, the town government and Garfield Clean Energy. It’s an example of how alternative energy is very beneficial.”

“This is a win-win-win for everybody,” said Katharine Rushton, project manager for Sunsense Solar, the Carbondale installation company that planned and built the array.

Nine months earlier, Aluise and a team of Silt town staff attended a workshop in Rifle hosted by Garfield Clean Energy. It was aimed at informing local governments in western Garfield County about how to get big solar energy systems installed with minimal upfront costs.

Silt leaders acted on the opportunity, working with Sunsense to secure renewable energy credits from Xcel Energy. The project financing was arranged by Sunforce Solutions International of San Francisco, and the array is owned by Samuel Engineering of Greenwood Village.

“We are delighted to help the town achieve lower energy costs,” said Philipp Herzog, CEO of Sunforce Solutions. “We are now the official owner,” said DJ Alemayehu, director of strategic ventures for Samuel Engineering. “We own several other power generation assets, and we understand these systems. We hope to do more projects in this area.”

Next up for the partners will be an array almost twice as big as Silt’s to power a water treatment plant for Battlement Mesa, followed by another array at Roaring Fork High School in Carbondale. 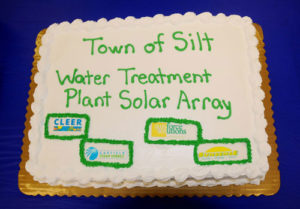 “We were able to utilize a lot of local labor. Solar energy is creating local jobs and keeping dollars here in the Colorado River Valley,” Ely said.

The daytime production of energy is more than enough to handle brief spikes in energy use when the plant’s heavy-duty pumps cycle on, Ogburn said. That will avoid a costly demand charge on the plant’s electric bill, saving hundreds of dollars, he said.

Jack Castle, utilities manager for the town of Silt, watched the project get built in November and December, and said the crew “did a great job.”

“Our water treatment plant was built about 10 years ago, Castle said, “and it’s a state-of-the-art, reverse osmosis treatment system. It’s going to be a plus to have a good source of energy on top of that.”

Upfront costs for Town of Silt: $2,000 for an engineering review fee with Xcel Energy.

Power Purchase Agreement financing allows installation of project at a very low cost to town, locks in electric costs for the plant over the 20-year contract, and will save the town an estimated $102,000 over life of the contract. Garfield Building Energy Navigator: The water plant feeds live energy use and solar energy production data, measured in 15-minute intervals, to a public website: Garfield.buildingenergynavigator.com