Ed Elder, owner of Elder Trucking in Rifle, with a few of the trucks in his 30-truck fleet.

Elder’s firm, Elder Trucking, owns a fleet of diesel-powered trucks, and in order to start those vehicles on cold winter mornings, Elder must heat the engine blocks every night.

Imagine 30 electrical cords extending to 30 large semi trucks and charging a heating element in each motor — an element drawing power much like a kitchen stove.

“There are times in winter when those heaters are going every day and we’re probably over $2,000 a month in electricity,” Elder said, shaking his head.

In 2011, Elder Trucking joined the Garfield Clean Energy Challenge. With the help of electrical contractor Charlie Terrell and Holy Cross Energy, Elder installed a timing system on his engine block heaters that cut his winter power bills in half.

“They’ll start at midnight and shut off at noon,” Elder said. “I’m hoping to get those bills down to three digits.”

He has other energy-saving factors in his favor as well. In addition to the engine block heater timers, he upgraded the exterior lighting around his property and in the shops where his crew maintains and repairs the truck fleet.

Elder Trucking has been around since 1996, hauling gravel, asphalt, water and other materials to build roads for the oil and gas industry and serve the communities of western Garfield County. The company occupies a sunny, 15-acre lot near the Garfield County Airport, southeast of Rifle.

Scattered around Elder’s office, shops and parking areas are 16 light fixtures that, for years, contained sodium lights that used 70 to 100 watts apiece. The 2012 upgrade replaced them with 13-watt LED lights that consume less power and emit a brighter and more natural-looking light.

Inside the shops, Elder replaced 400-watt floods with high-output T5 lamps that, like the exterior LEDs, give off a more pleasing light and use less energy. Unlike the old floodlights, the T5s switch on and off with no warm-up or cool-down time. And by wiring the fixtures on two separate switches, Elder can use all or half of the available lights at any time.

Because of the brightness of the T5s, Elder was able to reduce the number of fixtures in his tire shop (a separate building) from nine to five, and the overall number of bulbs from 36 to 20.

“They like it better because they actually have more light,” he said of his crew.

Between the exterior and interior changes, Elder cut the lighting portion of his utility bills by roughly two thirds.

The real savings, however, will come from the timers on the engine block heaters.

“This is the kind of thing that every truck company should consider — bus agencies, waste management, excavation companies, you name it,” said Erica Sparhawk an Energy Coach with CLEER, which manages the programs and services of Garfield Clean Energy. “The paybacks are good and the rebates are an additional incentive.”

Elder spent a total of $13,000 on all of his energy-efficiency measures, and received rebates from Garfield Clean Energy and Holy Cross Energy, his electrical utility, amounting to over $3,000.

Payback on the engine block timers was less than a year. The lighting upgrades will take between eight and nine years to pay off.

“There aren’t a lot of small businesses that can just pull out an extra $12,000 or $15,000 to do something like this,” he said. “If there weren’t the rebates out there, I probably wouldn’t have thought seriously about doing this.”

Ed Elder expects to save $1,000 a month on electricity at least 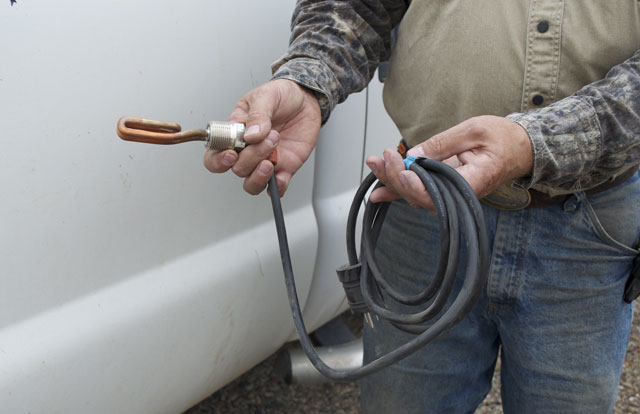 Ed Elder holds up a heating element and cord used to warm each of the diesel engines in his 30-truck fleet. 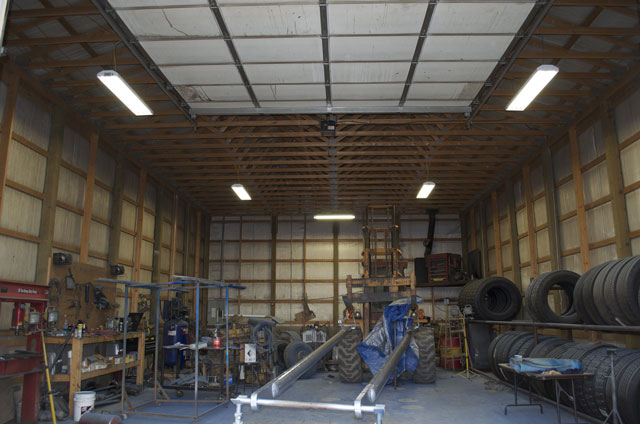