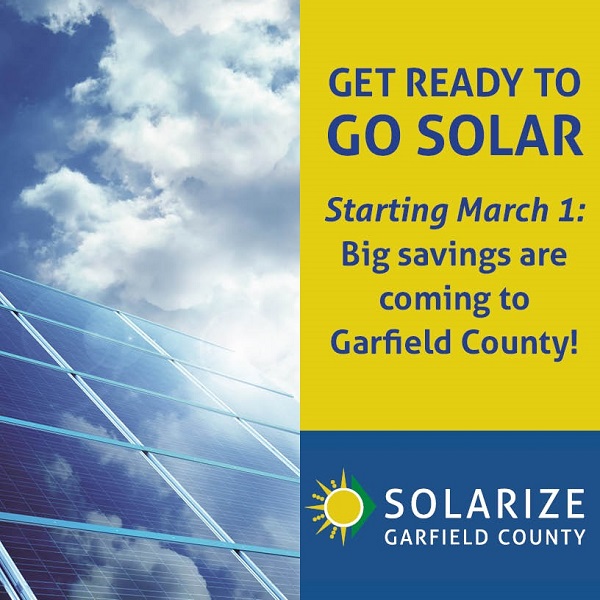 Garfield Clean Energy is set to launch a three-month campaign on March 1 designed to boost local solar energy as part of a broader strategy of economic development and diversification.

The campaign, Solarize Garfield County, will enable homeowners and business owners to access below-market pricing and special rebates on solar systems, along with support and unbiased advice on going solar.

Solarize programs, which have been successfully implemented in Summit, Mesa and other counties, harness the power of group buying to drive down prices and build community excitement around going solar.

The program contracts with a single solar company and gathers a pool of as many potential customers as possible during a limited period. This makes it easier and less expensive for residents to go solar, while allowing the installer to achieve greater economies of scale.

Solarize Garfield County brings together many of the elements that underlie Garfield Clean Energy’s strategy, according to GCE board member and New Castle Councilor Bruce Leland. Harnessing market forces to ramp up solar energy increases economic activity and employment, attracts more investment to the region, and helps speed Garfield County’s transition to a clean energy economy.

On top of that, noted Leland, investing in solar will save residents substantial money over time. Much of the money not spent on energy will be recirculated locally, further diversifying the economy.

“This is really a shining example of what GCE does and the value it contributes to our county,” Leland said.

“All of us involved with Garfield Clean Energy agree that ramping up solar is a powerful economic development strategy, and it’s an important part of the mix for us here in Garfield County. We have such great solar access, and it’s a win-win in terms of reducing people’s energy costs and increasing our energy independence.”

Garfield Clean Energy, CLEER and partner utilities and businesses have helped county residents, businesses, schools and local governments install over 20 MW of solar to date, with Garfield County currently leading the state in solar capacity on publicly owned facilities. This new program creates an additional step forward in accelerating the growth of home-grown solar energy, while reducing the upfront cost and stimulating the economic development benefits of solar.

Solarize Garfield County will be open to all county homeowners and business owners. The program offers a streamlined process where those who sign up are eligible for a free remote site assessment over the phone, followed by a no-cost, no-commitment, assessment on their property from a solar installer. At that point they can choose if they want to sign a contract or not.

Participants who sign a contract during the program’s March 1-June 4 timeframe will be eligible for an exclusive program discount on equipment costs offered by the installer. Maisa Metcalf, CLEER’s director of consumer engagement, said she anticipates that the discount will be in the region of $150-500 per system, noting that the more people that participate in the program, the greater the discount will be.

An even bigger incentive will be the utility rebates and tax credits available on solar systems. Holy Cross Energy and Glenwood Springs Electric offer rebates based on the size of the installed system, which typically take thousands of dollars off the price.

As part of Solarize Garfield County, Garfield Clean Energy will be offering a special $1,500 rebate to participants who don’t qualify for a utility rebate. These rebates, which will be awarded on a first-come, first-served basis, are intended to ensure access to the benefits of solar energy to western Garfield County residents who have historically been left out of utility programs.

Participants will also be encouraged to take advantage of utility rebates on an energy assessment of their home or business. These check-ups typically reveal various low-cost ways to save energy, which in turn can reduce the size and cost of the solar system.

Meanwhile, the federal tax credit on solar systems remains at 26 percent this year and next, thanks to an extension recently passed by Congress. That means up to a quarter of the total cost of the system will come back to the purchaser in the form of a tax refund or reduction in taxes owed.

All of these savings add to an already strong case for going solar, said Metcalf. Systems have dropped in price by more than 80 percent in the past decade. Typically, the savings on energy bills will more than offset the loan payments, and the system will likely produce free energy for many years after the loan has been paid off.

Various financing options will be available through Active Energies and state programs.

Metcalf added that installing a solar system also produces intangible benefits, such as the satisfaction of knowing you’re producing energy from your own rooftop or yard, doing your part to curb climate change, increasing our region’s energy independence “and being part of a fun community happening.”

“More and more people are installing solar, and this is a way to reduce the price for even more residents and businesses here in Garfield County,” Metcalf said. “We think this limited-time program will inspire lots of people who’ve been thinking about going solar to take action now.”

GCE, CLEER and Active Energies plan to promote Solarize Garfield County heavily through advertising, social media and other marketing. In addition, they’ll host a number of events (online only, due to COVID), starting with an introductory webinar on March 4. That webinar will cover the basics of how the program works as well as costs, rebates, tax credits, financing options and other aspects of solar systems.

Based in Eagle-Vail, Active Energies Solar has been installing residential and commercial solar in Garfield and other surrounding counties since 2006, and it has been the exclusive installer for the Summit County Solarize program since 2019.

“Through that program, we’ve helped over 110 families ‘go green’ by installing over 840kW of solar,” said Active Energies vice president Rich Clubine. “Solarize Garfield County will save consumers thousands of dollars on solar, and we’re delighted to partner with Garfield Clean Energy and CLEER to make it happen.”

For more information about Solarize, the March 4 webinar and the economics of going solar, see the Solarize section of this website. Registration for Solarize Garfield County will be through the website starting on March 1.

Solarize Garfield County is made possible through funding from Garfield Clean Energy and the Aspen Skiing Company Environment Foundation. It is supported by Solar Energy International’s Solar Forward Program, which assists rural communities throughout Colorado in growing their solar markets.