I confess: I put off getting a home energy assessment for… well, years. I thought I already knew enough about caulking windows and changing lightbulbs and that kind of stuff. Plus, my house is small and my utility bills are already pretty low. 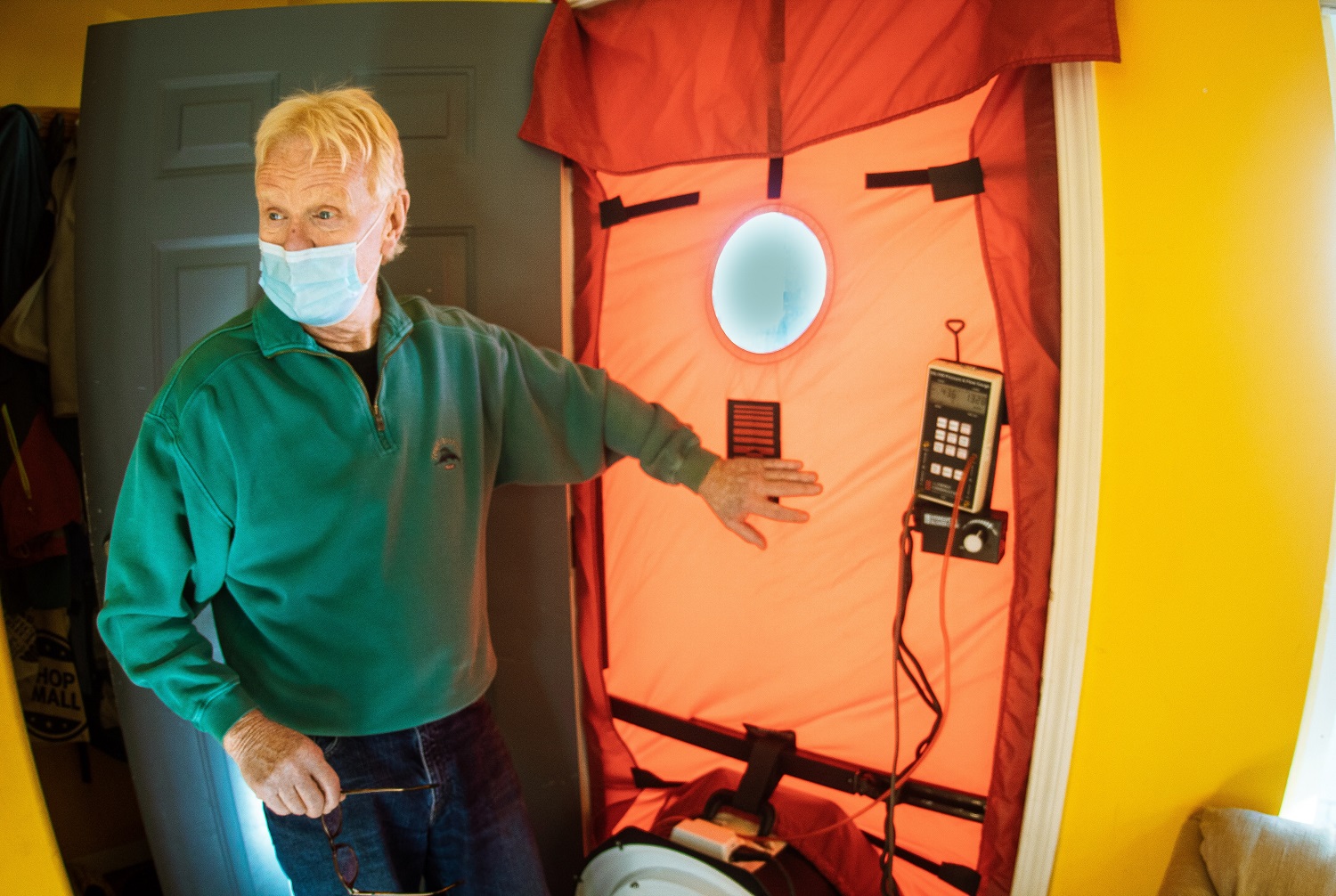 But then, last fall, when I tagged along on an assessment for an article, I was impressed by the sheer amount of practical information that the homeowner got from it. I resolved to have one done on my little abode.

And now I’m here to tell you that it was probably the best investment of $100 and two hours of my time I’ve ever made. I gained a much better understanding of how my house works and got a bunch of useful money/energy-saving tips – some of them so blindingly sensible and cheap they were worth the cost of the assessment alone.

Oh yeah, and I discovered a potentially dangerous problem with my heating system! (More on that in a minute.)

Charles Cady is a certified building energy analyst, but in my mind he was more like a house doctor. He arrived with a mask on his face and a black suitcase in each hand.

After introductions and a chatty preview of what he’d be doing, he asked to see the mechanical room. The first step in any home energy assessment is to inspect the hot water heater and furnace for hazards.

Charles opened one of his cases and pulled out a device that looked like an old-school calculator to check that the appliances were drafting correctly, and then he used a long probe-like instrument to test for carbon monoxide. Everything came up normal.

He then pointed out how the water heater and hot-water pipes all lacked insulation. I, being the know-it-all, suggested that that shouldn’t matter in the wintertime, because the lost heat would simply help heat the house. Charles gently reminded me that that’s not the only reason to insulate your pipes – when people complain about the length of time it takes to get hot water to run in the upstairs bathroom, it’s usually because of the heat being lost out of bare pipes.

Furthermore, he said, insulation does save energy (and money) in the warm months. He explained that a $20 water heater blanket will typically pay for itself in about three years.

I looked at my naked water heater. D’oh!

Shifting our attention to the furnace, Charles asked if I’d changed the filter recently (I had), and then told me another thing I didn’t know. The furnace filter isn’t to make the air clean for you, he explained, it’s for the furnace. “You don’t want your furnace to be burning up dust and cat hair,” he said. That’s a good way to shorten the life of a furnace, which is an expensive item to replace.

How to get started

Home energy assessments can vary quite a bit in what they cover and how much they cost, depending on your electric and gas utility and your location. An on-site assessment will generally cost between $300 and $450, but utility rebates can bring that down to as little as $100. Some utilities now offer free remote assessments by phone.

GCE residential energy coach Maisa Metcalf can walk you through your options. Contact her at (970) 704-9200 x2 or info@GarfieldCleanEnergy.org. You can also fill in this form to start the process, and Maisa will call you back.

“This is what I was afraid of” 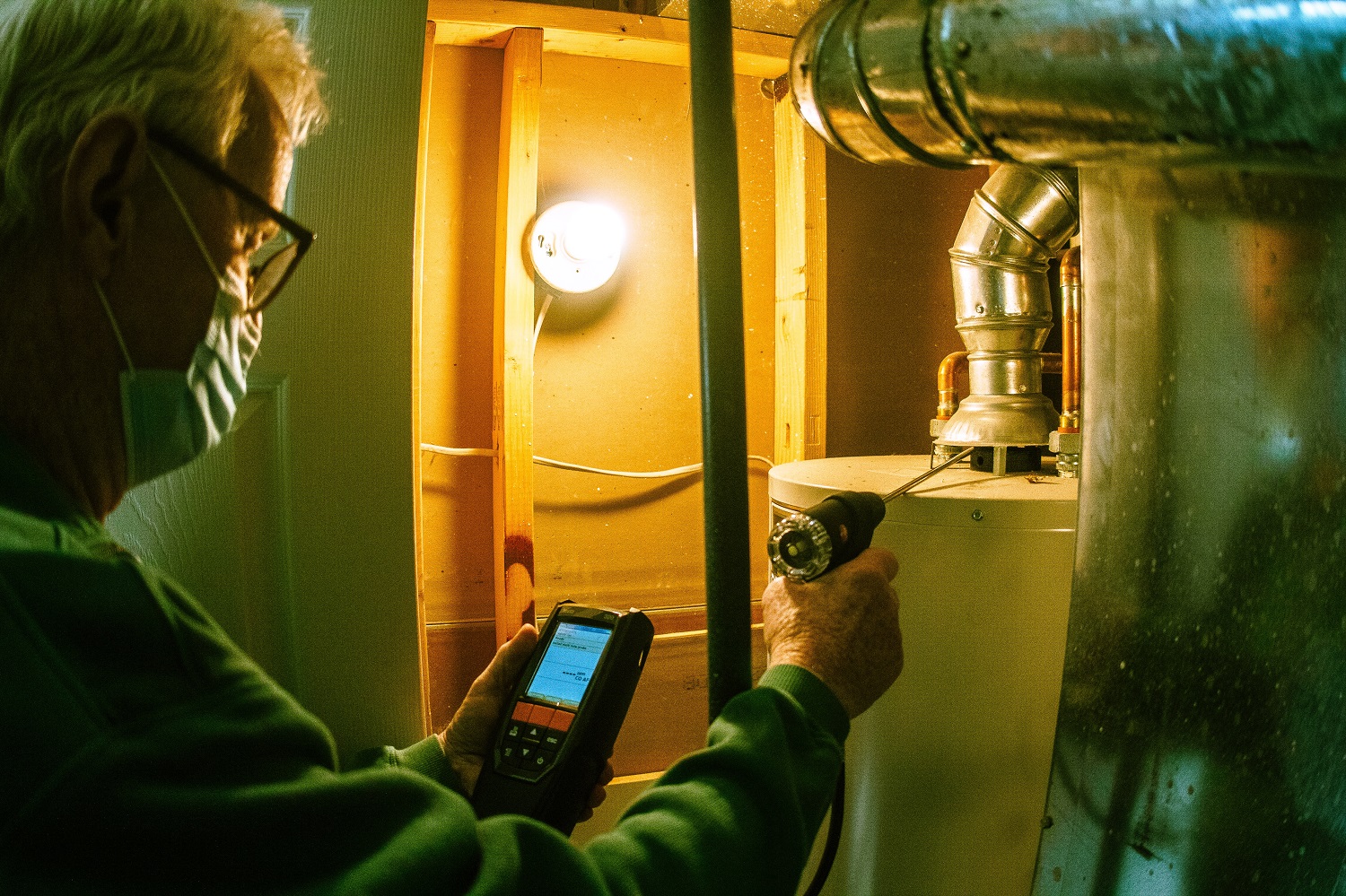 Checking for carbon monoxide in the exhaust from the hot water tank. Photo credit: Sierra Jeter

The next item on Charles’ clipboard was to count lightbulbs and windows. All my bulbs were LEDs or compact fluorescents, but if any had been old-style incandescent bulbs Charles would have given me free LED replacements and begged me to swap them out. Even if you have to buy them yourself, LEDs will save so much electricity they’ll pay for themselves in less than a year.

In the kitchen, Charles noted that all my appliances were 20 years old and not EnergyStar-rated. I knew this, of course, but had assumed it wouldn’t make that much difference. I pointed to the energy label in my fridge – it said 697 kWh/year. If I were to buy a new one the same size, I asked, how much would that number be?

“About half,” Charles replied.

It turns out that appliances have gotten a lot more efficient in the past two decades, thanks mainly to government mandates. We complain about regulations, Charles observed, but appliance efficiency standards are a real success story because they reduce emissions while saving people money.

We went to look at the attic. I pulled down the trap door and Charles went up the ladder.

“OK, this is what I was afraid of,” came his muffled voice.

Charles estimated that the attic-floor insulation was probably R-38, compared to the R-49 now required by code in my town. But what Charles was pointing at was the plywood flooring that the previous owner had put on top of the insulation – he reckoned that it was compressing the insulation by half, with a corresponding reduction in its effectiveness. That’s one reason my upstairs gets so hot in the summer.

In addition, the access door was completely uninsulated, and there was a gap around the door. Not a good situation: given that the attic is vented, the wind was probably blowing fiberglass filaments through the gap into my bedroom! 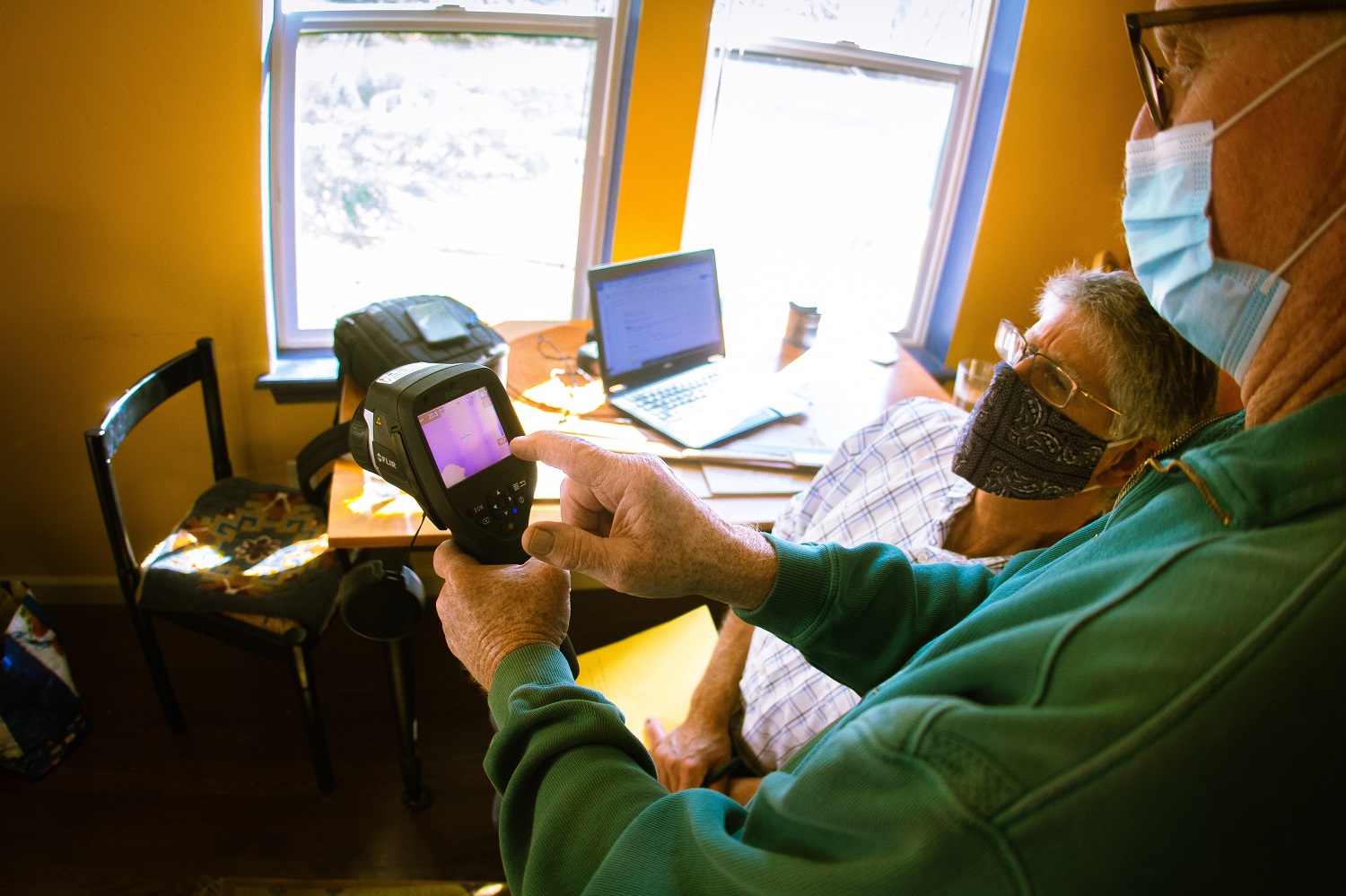 Now it was time for the grand finale: the blower door test and thermal imaging. Charles opened up his second case and, like a magician setting up an elaborate trick, he pulled out a tent-like contraption of orange nylon and a fan in the shape of a big, round hat box. He opened the front door and installed the setup in the gap. When he turned on the fan, it made a low roar.

He adjusted the fan to blow air outwards at a standard rate, causing air to be drawn into the house. This was to reveal any gaps that should be filled with weatherstripping, caulk or insulation.

With the fan running, Charles pulled out his thermal imaging camera and started to scan the walls, windows and doors. The camera reads infrared light, with areas of relative heat showing up in yellows and golds, colder areas in blues and purples. On the day of Charles’ visit it was warm outside, so gaps and places with poor insulation appeared yellow on the screen.

As we made our way around the house, scanning with the camera and also feeling for moving air with our hands, we discovered two primary sources of infiltration. The first, as expected, was the attic door. Charles recommended installing an attic door “tent” to stop the air flow while also providing insulation.

The second problem area came as a complete surprise. As we made our way down to the basement, we noticed a swampy smell and followed it with our noses. It proved to be coming from a drain in the floor of the mechanical room – much of the air pulled into the house by the blower door fan was coming in through this one drain. The solution? Pour a bit of water down the drain to fill the bend of the “p-trap” below. Cost: $0.

So there we were in the mechanical room, with Charles giving me more information about water heater blankets, when we both noticed an alarming sight. A major connector in the exhaust piping for the water heater and furnace had a huge crack in it, and upon further inspection, some of the pipes leading to it were similarly deteriorated.

This turned out to be the most significant finding of the whole assessment, by far. Although the earlier tests hadn’t detected any drafting or carbon monoxide issues, Charles flagged the situation as an urgent safety concern and urged me to get it fixed immediately. Judging by the advanced state of deterioration, the pipes could have started leaking CO at any time.

Charles called me first thing the next morning, reminding me to schedule the repair – it was that important. I appreciated that. I got it fixed within the week, and was glad I’d done it, because the heating season started in earnest shortly after that.

I received Charles’ report by email a few days later, putting in writing all his observations and recommendations. I’m now working through the list. Filling the p-trap with water was a no-brainer. I haven’t yet ordered the water heater blanket and the attic door tent, but I’ve thrown an old duvet over the attic door as a stopgap. I’ve replaced the old gas range with an electric one (a first step toward electrifying the house), and my next project is to start shopping for a new Energy Star-rated fridge.

And the attic insulation? Ugh. I think I’ll wait till spring to tackle that!