A group of state legislators and industry leaders today took a tour of economically significant sites in Garfield County, starting with a presentation by GCE at the large solar installation at the Rifle Wastewater Treatment Plant.

State Rep. Perry Will, who hosted the tour, said the solar array was included to highlight the increasing amount of solar energy in the county and the region’s leadership in using clean energy as an economic development strategy.

“It’s all about the diversification,” Rep. Will told the group, which included seven other members of the Colorado Legislature and other industry representatives assembled by the Colorado Competitive Council.

He noted that he doesn’t expect to see solar power completely replace fossil fuels anytime soon, but thinks adding it to the mix makes sense where it can be done cost-effectively.

Other local speakers at the event hammered the message that solar and wind energy is already affordable, and is steadily becoming more so. When combined with energy efficiency programs, renewable energy can be a significant part of an overall economic development strategy.

Parachute Town Administrator Stuart McArthur spoke about the economic opportunity that clean energy offers, even in an area historically reliant on oil and gas. McArthur also serves as chair of Garfield Clean Energy.

Rifle Mayor Barbara Clifton said that the city’s own facilities now run on 100-percent clean energy, thanks to the wastewater plant array and three other solar sites. “There are many things we want to do or might do, but it’s got to fit in the budget,” she said. The solar projects have “absolutely” saved the city money, and have the added benefit of locking in electricity rates for 20 years.

Katharine Rushton, renewable energy program director for Clean Energy Economy for the Region, explained that the Rifle wastewater site includes two solar arrays – one provides electricity for the wastewater plant and the other is a community solar garden – demonstrating the variety of  community-scale solar business models that can be used to put city-owned land to work.

“We’re seeing [solar] technology improve so much, it’s not only competing with coal, it’s beating it from an economic standpoint,” said Mike Steiner, key accounts specialist with Holy Cross Energy. He predicted that Holy Cross would easily hit its goal of 70-percent renewable energy by 2030, without increasing customers’ rates, even if federal tax credits are phased out.

Kruger acknowledged that the transition to clean energy will also cause economic disruption as, for example, workers at the Craig power plant will lose their jobs when the plant is closed down between now and 2030. But, he noted, the existing transmission lines make Craig the perfect place to develop large-scale solar.

He urged the visiting legislators to support full funding of the Colorado Office of Just Transition to facilitate the necessary discussions and agreements.

After the solar presentation, the group went on to tour Rifle’s Grand River Health and the Glenwood Caverns Adventure Park.

The tour was part of the Colorado Competitive Council’s annual Business Base Camp program, in which freshman legislators visit their respective districts to better understand the common interests and unique challenges around the state. Rep. Will selected the sites to visit in his District 57, which includes Garfield, Rio Blanco and Moffatt counties. 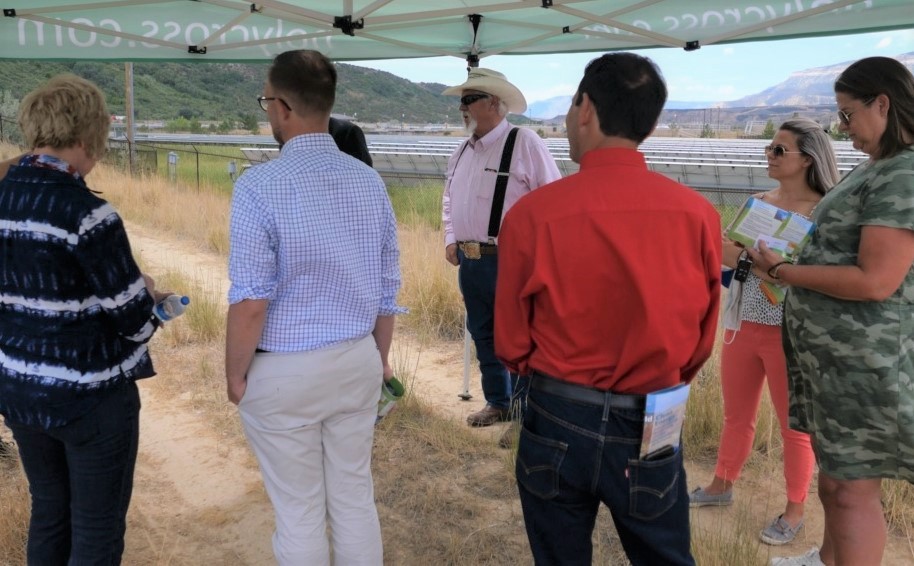 Rep. Perry Will and other visiting legislators at the Rifle Water Treatment Plant solar array.